In search of Paris

As I have mentioned before on this blog, I am a sucker for any book set in Paris. I keep reading any and every book that boasts that city as its backdrop, and more often than not, I am disappointed; Paris, wonderful as it is, just can’t carry a whole book. But occasionally I am not disappointed; here are two books with the Parisian flavor that also delivered as good stories.

The first book is Unbecoming, a debut novel by Rebecca Scherm. I’m happy that I read it before looking at Goodreads to see what people had to say, because everyone there was comparing it to The Goldfinch, by Donna Tartt, to The Talented Mr. Ripley, by Patricia Highsmith, and (inevitably and inanely) to Gone Girl, by Gillian Flynn. Because I did not see all the comparisons to other authors and styles, I was able to approach it “fresh”; and without all those judgments to hinder me, I was delighted by it.

The book takes place partially in the present day and partially in flashback. A girl named Grace is living in Paris, and although she is from Tennessee, she tells people her name is Julie and that she hails from California, because she is in hiding. She is living a quiet life, working for a small shop that specializes in restorations, and spends her days mending teapots and re-setting gems. But there is a mystery in her past, to do with the boy she married and the boy she loved (two different boys); she has just learned that the two have recently been paroled from prison sentences they served after an art heist gone bad that was planned by Grace but from which she escaped unscathed, and now she’s afraid they’ll be after her.

The evolution of the main character and the degrees of denial and self-knowledge, combined with the plots and plans, the failed heist, and the anticipation of revenge, all kept me intrigued throughout this novel. Ironically, the only thing that disappointed me a tiny bit was that the Paris setting wasn’t all that distinct—she worked in a shop with a girl from Poland via Amsterdam; she lived in a suburb outside the city with a German landlady; and there was almost no Parisian “feel” to it, not even in the street market scenes, which were more grim than they were picturesque. Also, more of it actually took place in Garland, Tennessee than in Paris. But that’s a small caveat—this was a skilled debut from an author I will revisit should she write more. 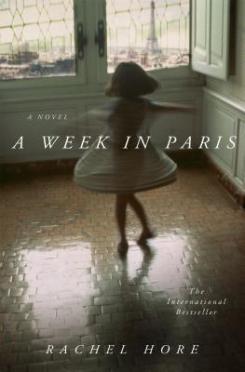 The second book, A Week in Paris, by Rachel Hore, fulfilled every expectation I had for a book that would evoke the feel and ambiance of Paris—the streets, markets, music, cafés, churches, schools, everything. That by itself sets the bar pretty low for a reason to like a novel, but after having read a slew of books that promised me Paris and didn’t deliver, this one was completely satisfying—not only for that reason, however!

Although the two protagonists, mother and daughter, are both English by birth, both of their stories—one beginning in 1937 and the other in 1961—take place in the City of Light. Fay Knox, the daughter, knows little of Kitty Knox’s story, or in fact her own; her childhood before the age of six is a complete blank to her, and her mother doesn’t talk about it, with the excuse that it’s too painful to revisit the time directly after she lost her beloved husband, Eugene.

Two things happen nearly simultaneously that lead Fay to that past: Kitty has what amounts to a nervous breakdown and is hospitalized in an asylum to recuperate; and Fay is hired by an orchestra (she is an accomplished violinist) to play three dates in Paris over the course of a week’s time. When Kitty’s doctor convinces Fay that in these early stages of her depression her mother won’t even notice that she’s gone, Fay takes the job and, while in Paris, connects with an old friend of her mother’s who reveals a surprising and disturbing version of the past that Fay has never heard before.

Both the story and the style of writing reminded me of Kate Morton, particularly evoking her book The Distant Hours. I’m tempted to describe it as Kate Morton “lite,” although I don’t mean that in a negative way; simply that, as detailed as Hore’s book is, it’s simplicity itself when compared to the microscopic descriptiveness of Morton’s works. But the pattern of a mystery from the past intruding itself on the present, and a daughter attempting to solve the puzzle of her mother’s life, are quite similar, and equally well done. I haven’t read anything else of Hore’s, but will definitely seek something out soon.

Either of these books, in fact, would appeal to someone who appreciates a mystery but doesn’t wish to read about murder, victims, police, or the other trappings of a straight-up mystery novel. I guess you could call them “puzzle” books rather than mysteries, but the solution to a secret from the past is integral to their plot lines.

An extra comment: I am always intrigued by what publishers do to sell their books once they make the move from hardcover to paperback. Unbecoming went from a cover that did express its contents, though weirdly turned on its side, to something that looks like a rather obvious young adult novel about a girl who disappears, while the cover of A Week in Paris morphed from a photo that evoked the somewhat somber mood of the story to one that might more accurately portray its contents, but with a typeface choice that gives it a slightly upbeat chick lit feel. Do book art directors ever actually read the books, one wonders?

← E-books for free
The Horse Dancer →

8 Comments on “In search of Paris”