I’m always happy when I see mysteries written for teens; for some reason, this is a genre that isn’t nearly as popular with YA authors as it is with adult writers. And many YA authors seem caught in the homage trap, as they continue to remake Sherlock Holmes to fit teenage readers, either by picturing him as a youth (Andy Lane), inventing a younger sibling with similar gifts for detection (Nancy Springer), or postulating how his descendants would carry on his legacy (Brittany Cavallaro).

If they’re not playing a variation on Holmes, there are also the legacies of Agatha Christie (Gretchen McNeil) and James Bond (Charlie Higson) to mine for material. And then there are the take-offs on popular television icons, such as Tory Brennan, the great-niece of forensic anthropologist Temperance Brennan of Bones (Kathy Reichs), or relatives of iconic series stars, such as Mickey Bolitar, nephew of sports agent and part-time sleuth Myron Bolitar (Harlan Coben).

I’m not saying any of these are bad; in fact some of them are quite good. But I do wonder sometimes why more YA authors don’t take off on their own when it comes to the mystery genre. Certainly the field is burgeoning with fertile imagination, but most of it seems to be expressed through fantasy, science fiction, or retold fairy tales. 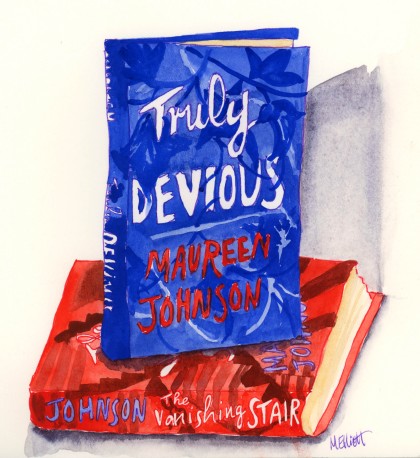 Maureen Johnson’s first excellent mystery series, Shades of London, has a Jack the Ripper connection up its sleeve, and throws in paranormal features as well to keep the attention of fickle teens. But her new series, beginning with the book Truly Devious, shows she is an author who knows how to plot, how to build suspense, and how to introduce twists, without reliance on previous material.

When I first began reading the book, I wasn’t sure I was going to like it, because it does make use of a familiar and somewhat over-used trope: the boarding school. How many young adult books begin by separating their odd, misfit protagonists from their drearily predictable parents and sending them off to a mansion steeped in mist and mystery? But if we didn’t love this trope before, we certainly embraced it post-Harry Potter, and Johnson makes a few sly references to that series in this one:

“Stevie had great hopes for the boarding school dining hall. She knew better than to hope for floating candlesticks and ghosts, but long wooden tables didn’t seem out of the question.” 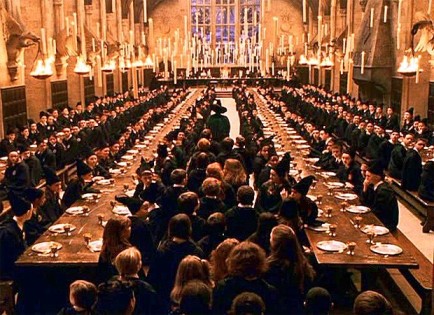 The basic premise: Albert Ellingham, an early 20th-century tycoon, decides to create a boarding school “where learning is a game,” and populate it with a combination of rich and poor teens, all of whom have some special gift for learning. He also builds himself and his family an adjacent, ornate mansion filled with secret passageways and tunnels to gazebos and such on far parts of the property. In 1936, shortly after the school has opened, Ellingham’s wife and daughter are kidnapped. There is one clue, a Dorothy Parker-esque riddle/poem signed “Truly, Devious.” Iris and Alice are never returned, although at least one of them is discovered to have met a tragic end, and the mystery of who took them and why has never been solved.

Stevie Bell has received an invitation to be a student at Ellingham Academy, and she couldn’t be more thrilled: Stevie is a true crime enthusiast, as well as possibly the world’s biggest aficionado and quite the authority on this particular mystery; and the chance to be on the property to expand her knowledge, search for more clues, and potentially even solve it is making her positively giddy. But when death revisits Ellingham, Stevie finds herself in an awkward position…

I really enjoyed this book. Stevie is a human, interesting main character, and the secondary characters are all just as quirky and well developed. The flashback scenes are gripping, and the present-day mystery is absorbing as well. But as I got down to the last 30 pages or so of the book, I began to realize that there were not enough words left in the book to reveal all the mysteries (past or present), and then…the cliffhanger. If it weren’t for the fact that I am behind on my YA reading and the sequel for this book just came out a few weeks ago, I would be howling with frustration about now! Instead, I ordered the second book and started reading as soon as it arrived.

The Vanishing Stair takes up only a few weeks after Truly Devious left off. Stevie’s parents insisted she leave the boarding school after all the drama that ensued, and she’s miserable back at home, once more subject to her parents’ oversight. But fate, in the person of politician Edward King (idolized by Stevie’s conservative parents and loathed by Stevie for everything he stands for), steps in: King’s son David, one of Stevie’s classmates at Ellingham, is acting out in a big way, and King’s theory is that returning Stevie to the school will act as a damper on David’s bad behavior and keep him there until he can graduate. Stevie has no such confidence, but the opportunity to go back is too amazing for her to quibble over the means by which she arrives—and thus begins the first of the secrets and lies…

This book introduces new characters, most notably Dr. Fenton, the author of some of the leading research into the Ellingham mystery, who hires Stevie to help her when she decides to release an updated volume, and soon begins to hint she knows more than she’s saying. She has an engaging nephew, worried for her mental and emotional state, who tries to enlist Stevie to help protect her. The familiar housemates and friends from the first book are also present and developed further, as is Stevie’s overall grasp of the mystery. But at the end of volume two, just as you are receiving some actual facts about the kidnapping from the horse’s mouth (Albert Ellingham), another cliffhanger ensues and the aforementioned howls of frustration are now truly aimed at Maureen Johnson’s head, because book three isn’t due out until sometime in 2020. 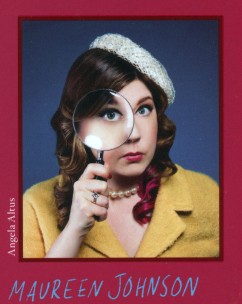 So…should you start this mystery series, knowing you will have to wait at least a year for its final outcome? Well, that depends: Are you a re-reader? Because there are so many tiny, important details about the mystery buried in both books to which the author later refers that I’m thinking I will be re-reading them to remind myself of those before assaying the third one, whenever the third one manifests. So if you don’t mind refreshing your memory, go ahead; but if you’re one of those who stubbornly refuses to read anything for a second time, then wait for #3 and have a long weekend of wallowing in the Ellingham mystery, start to finish!