My reading time is, of necessity, taken up right now with the novels I am assigning to my Young Adult Literature class at UCLA’s MLIS program. Most of them are a re-read for me, many with a specific goal of evoking some quality of YA lit that will give my class a context for where it came from, the ways in which it has been and continues to be effective for teenagers, and where it is now.

Last week we had a far-roving and engaging discussion about two “classics” of YA—The Outsiders, by S. E. Hinton, and The Chocolate War, by Robert Cormier—and two later books that continued the job of these seminal works—Speak, by Laurie Halse Anderson, and The Perks of Being A Wallflower, by Stephen Chbosky.

Previous to the 1960s, there were narrowly defined categories for this newly emerging fiction sector: adventure stories for boys, romance for girls. That was pretty much the extent of YA fiction. With the exception of some vocation-driven series like Sue Barton: Student Nurse and Nancy Drew, most of the books written for teenagers were, to quote historian and critic Michael Cart, “slick, patterned, rather inconsequential stories written to capitalize on a rapidly expanding market.”

Hinton’s book was the start of the writing revolution in teen literature. Here was a teenager, writing from personal observation and with thematic relevance about class warfare, rejecting “the inane junk lining the teen-age shelf of the library” (to quote the young author Hinton herself), and echoing the rejection of the status quo for which the 1960s were known. The year 1967 kicked off a positive flurry of books about such formerly verboten topics as gangs, drug use, underage sex, homosexuality, teen pregnancy, and abortion. Teen fiction went from sweet stories tied up with a bow to exemplars of determinism and naturalism. Robert Cormier, who wrote The Chocolate War in 1974, commented that “Adolescence is such a lacerating time that most of us carry the baggage of our adolescence with us all our lives.” Judging from the discussion we had about these first two books and the two that followed, many YA authors and the teens who read them agreed with him.

There are certainly issues with these books that make them problematic to recommend to today’s teens. The absence of a single non-white character, the blatant misogyny exhibited towards both the “bad” girls and the “good” in the society of the 1960s, and the rather blatant sentimentality with which the characters are treated in The Outsiders would seem to be stumbling blocks, and yet this book is still widely read and enjoyed. The dark atmosphere of The Chocolate War, depicting teens (and humans in general) as hapless victims of social and natural forces and holding out no happy ending, seems similarly discouraging, but the book continues to check out of the library.

Other popular books of that era, such as The Contender, by Robert Lipsyte, which took up the theme of becoming an individual and focused on self-transformation through the eyes of an African American protagonist, or Alice Childress’s A Hero Ain’t Nothin’ But A Sandwich, which explored heroin addiction in the first person of 12 distinct voices, continued and extended the reach of the admittedly rather gritty view of the teenage years. Author Richard Peck cited these works as books “about young people that parents thought their children didn’t know.” They fostered a writing revolution that has ebbed and flowed ever since, interrupted by the inane “problem novels” of the 1980s and revitalized in the 1990s, pushed off track by trendy fiction with the vampire craze and the fascination with all things paranormal and revitalized yet again in dystopian and post-apocalyptic fiction and the current return to realism.

The two books we read from 1999, Speak and The Perks of Being A Wallflower, are also classic books about secrets, about guilt, and about the adolescent task of figuring out what responsibility you bear for your circumstances versus the degree to which you have been victimized by others and by life itself. The class discussion concluded that these books are necessary so that teens who are in similar situations can see themselves in their literature, realize that they’re not alone, and possibly find reason for hope.

This week we continued this theme in a way, but brought it up to date with our segment on “soft reads vs. edgy fiction.” There are obviously teens for whom the books full of personal human tragedy are not relevant or not desirable. Likewise, these teens’ parents are more comfortable with a literature that doesn’t expose their children to language, relationships, and frank talk beyond their level of emotional maturity. There is definitely a place in teen fiction for the equivalent in adult fiction of the “cozy,” the soft read, the book that tells an uplifting and nonthreatening tale with a positive message and a happy ending. Even those who appreciate gritty fiction sometimes enjoy taking a break from it!

This week’s exemplar of a soft read was Joan Bauer’s Hope Was Here, which would seem with its very title to express a different message than those other books we had been reading. Bauer is among the many authors who has written a baker’s dozen of books (between 1995 and 2016) about perky, approachable protagonists with a sprightly, can-do attitude and a feel-good mood. Authors for slightly older teens who want soft reads include Maureen Johnson, Melissa Kantor, Ally Carter, and Sarah Dessen.

While most of these books are aimed at a female audience, their equivalent in gentle reads for boys include adventure, science fiction, and fantasy genre fiction that the girls likewise appreciate. Some of the more popular series that serve this purpose of transitioning children from age 11 or so to about age 14 are the Pendragon series by D. J. MacHale; the Alex Rider series by Anthony Horowitz; the Artemis Fowl series by Eoin Colfer; and Michael Scott’s books beginning with The Alchemyst.

The flip side, the polar opposite of these books are those that place a high premium on being real—the realer the better—and if that means drinking and smoking, profanity, sex, and violence, then bring it on. This edgy fiction pushes all the boundaries beloved of teens and shocking to parents, and gives teens the ability to encounter those they may not ever know in real life, through the pages of books.

The ones we read this week included: 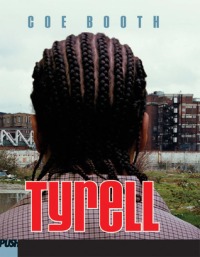 Tyrell, by Coe Booth: Tyrell is 14 years old. He’s grown up in the projects, with his dad, his moms, and his little bro Troy, but his dad’s just gone to prison, his moms is a hot mess incapable of caring for herself or her children, and the weight of it all is resting heavily on Tyrell’s shoulders. He loves his girlfriend but she won’t put out, he’s tempted by an overly friendly new girl he meets at the roach-filled motel where social services has parked them, and he’s angry and confused about the role into which his mother is trying to force him, which is as the wage earner in the absence of his father.

If You Find Me, by Emily Murdoch: When she was five years old, Carey’s mother stole her away from her father and took her to live in a trailer in the middle of a national forest. Her mother, bipolar and a meth addict, subsequently gave birth to a second daughter, whom Carey took care of during her mother’s frequent absences. Carey’s mother did whatever she had to do, including exploiting her daughter, in order to get a drug fix or a new winter coat, while the girls lived on cans of beans and Chef Boyardee and the squirrels and rabbits Carey shot in the forest. One day, after their mother has been missing long enough for the store of beans to be looking worryingly small, a man and a woman show up calling their names, and Carey and Jenessa are whisked off to the real world to live with Carey’s father, stepmother, and stepsister, with all the adjustments this involves. But Carey can’t help thinking about the crime she committed during a moment of desperation back in the forest, and worrying that its revelation will separate her from her sister, the only person in the world she really loves. 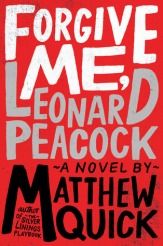 Forgive Me, Leonard Peacock, by Matthew Quick: Leonard is the epitome of the sad loner at every high school, and like that guy, he’s about to indulge in some stereotypical behavior: His plan is to take a gun to school, shoot his former best friend, and then off himself after. But first, he wants to make a final connection with the few people in his life who have been kind to him by giving them each a gift. The book is the story of the last couple of days of Leonard’s sorry life…although some letters to Leonard from the future hold out a ray of hope.

Parents, teachers, and random adults have asked me, during my tenure as a teen librarian, “Of what value are these books for teens? Why are all of your book lists so irredeemably bleak?” My answer has always been, it’s what the teens want, and in many cases it’s what the teens need. Protecting a privileged notion of what constitutes teen literature can easily deprive teens of reading books that let them identify and understand their sadness, their loneliness, and their anger, and also equip them to fight the real monsters in their lives, whether those are other teens, the adults who control them, the world at large, or simply their own thoughts, feelings and beliefs.

The paradox of much of edgy fiction is that although the circumstances in which the characters exist are ugly, the characters themselves are beautiful in their vulnerability, and the literature itself can be lyrical even in its truthfulness. And in my discussion with my class, some of whom were put off or even horrified by the selection of edgy fiction we read, we ironically came to the conclusion that the soft reads are often identical in their effect to the edgy ones, and the adults who laud them as more appropriate aren’t seeing the spectrum on which they appear.

The book we read, Hope Was Here, has a protagonist whose mother deserted her, and she was raised by her aunt. She had to move repeatedly during her 16 years because of financial hardship. Her only constant is being a good waitress at the serial diners at which she has worked. Her new boss, of whom she has become fond, is dying of cancer. The town is run by a crooked politician who is exploiting the townsfolk. Reading that synopsis, would you guess it was a soft read? The fact that the heroine, Hope, takes a relentlessly positive attitude toward the obstacles in her life doesn’t negate the fact that she’s been dealt a tough hand.

The truth about young adult literature is, no matter what its guise—soft read, edgy fiction, paranormal or dystopia—the really good stuff is designed to invoke one important quality from the teens who read it: Empathy. The greatest gift we as librarians (or teachers or parents or friends) can give our teens is how to experience empathy; and one of the best ways to teach them that is through reading.