I’m always looking at other people’s (and publications’) lists, to see if there are stand-out books on them that I somehow missed reading. On a list that was called something like “best sci fi and fantasy books you may not have discovered,” I found a few with which I was unfamiliar and ordered them. The first one I read was Sorcerer to the Crown, by Zen Cho.

Most people who reviewed it on Goodreads either lauded it or hated it for one reason: It reminded them of Jonathan Strange and Mr. Norrell, by Susanna Clarke. Some loved it because it had similar characteristics but was “half the length and twice the fun,” while others loathed it because they found it derivative and without the same careful attention to detail given to the subject by Clarke.

I have not (yet) read Susanna Clarke’s 800+ pages, so that comparison sparked no reaction for me; but when reviewers started comparing it to Georgette Heyer and Jane Austen, I went back and took a closer look. 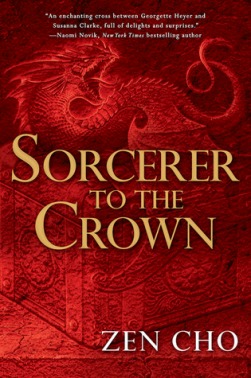 The story takes place in an alternate-reality London, where magic was once a powerful and primary occupation for the upper classes and every prominent family seemed to feature at least one sorcerer accompanied by his familiar. (Women are banned from practicing magic, unless it’s the hedge-witch variety of small household spells to lighten the domestic load.) But in the current day, England’s atmospheric magic is drying up. No more familiars are coming over from Fairyland, and no promising young sons are venturing there in hopes of catching the Fairy Queen’s eye.

Sir Stephen Wythe, the Sorcerer to the Crown, has recently died under mysterious circumstances; his familiar has likewise disappeared, and the man who has taken up his staff to become the new head Sorcerer is Sir Stephen’s foster son, Zacharias, an emancipated slave raised by Sir Stephen to be a thaumaturge. Zacharias, a conscientious, retiring, and painstaking person, would much rather have remained in the background, doing his research into the restoration of England’s magic; his new role throws him to the lions of extreme prejudice, with plots against his life, perilous meetings with the Fairy Court, and speeches at such frightening venues as a school of gentlewitches (he’s cautioning them against the dangers of magic for women). Then he meets Miss Prunella Gentleman, also an outcast because of her lack of good birth and the “dusky skin” that proves she is of mixed race, and Prunella’s aptitude for magic and the effrontery to practice it turn his perceptions upside down.

The book is set in Britain during the Regency period and the Napoleonic wars. Those who compare it with Heyer and Austen say it fulfills their requirements for a comedy of manners with amusing commentary also reminiscent of Wodehouse (the speech at the girls’ school being that example). I didn’t find the language or tone either of them to be reminiscent of Heyer’s lighthearted works, nor were there sufficient social interactions to spark recognition of her influence, and the romantic aspect was almost entirely lacking. I did think perhaps Austen would have enjoyed Cho’s send-up of the nobly born and pretentiously superior, commenting on their bigotry and their assumptions about “good birth” always triumphing over morals and brains.

The book did remind me of some others: Gail Carriger’s Etiquette and Espionage, because of the young-ladies-in-training aspect, as well as something about the pacing and language of the story-telling; and Jonathan Stroud’s The Amulet of Samarkand (Bartimaeus book #1), which features a similar setting of an alternate London ruled by stuffily self-regarding magicians. It’s also vaguely reminiscent of Garth Nix’s Newt’s Emerald (in fact, it looks like the same artist for the cover of that book has been employed for Cho’s sequel), which in my opinion pulls off the Heyer tie-in a bit better.

Because I read Sorcerer to the Crown before I looked at any of the reviews (including the blurbs on the back cover), I was initially quite taken aback by both the racism and the misogyny so freely expressed by Cho’s characters. The use of the term “piccaninny” on page four shocked me so much that I almost put the book down. Only the comment of Mr. Damerell, “What an edifying sight for a child—a room full of men several times his size, calling him names,” encouraged me to continue. Likewise, the discovery by Zaccharias that the gentlewitches’ school has been using a killing spell designed to drain the magic from its victims in order to keep its young ladies in line (i.e., magic-free) was a bit daunting. I had not yet put the book in context as a Regency send-up, so for me, the author’s choices were jarringly unexpected for a book written in 2015 by a woman! Once I had figured out the intended setting and atmosphere, I forgave the various liberties, but in this era of extreme care about the way the races and the sexes are portrayed, I have to confess it still left a lingering uneasiness about the book.

My final reaction was primarily that of enjoyment; but I didn’t give it the wholehearted five stars it received from many of its Goodreads fans. Perhaps, for me, Cho simply attempted too much within the context of this one volume. Perhaps I wasn’t in the proper mood to appreciate its quirks. For whatever reason, I didn’t click with it; but that isn’t to say that you wouldn’t. If you enjoyed the Finishing School or Parasol Protectorate books of Gail Carriger, you might like it a lot.

There is also a sequel, The True Queen, released just this year, that takes the reader to Janda Baik, the country from whence one of the first book’s main and powerful female characters hails. It received similarly high ratings from those on Goodreads who enjoyed the first book.