I had forgotten how vivid are the characters in a Barbara Kingsolver novel. It’s mostly because she doesn’t write her novels vaguely; she sets them solidly in the events of the present-day, whatever that time period may be, and allows (or forces) her protagonists to confront the facts of their lives and of life, without filters. 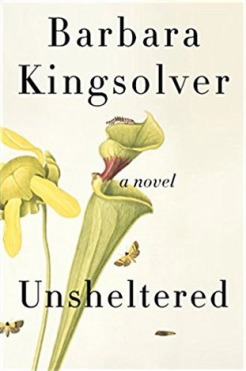 Kingsolver is the founder of the PEN/Bellwether Prize for Socially Engaged Fiction. There is a reason for that—Kingsolver does not write fiction that isn’t political. Unsheltered, her newest novel, is no exception, but it is political in such a simultaneously personal and universal way that it fastens onto the mind of her reader with a compelling message it’s hard not to understand.

Unsheltered is the parallel stories of two people—and two families—living at the corner of Sixth and Plum in Vineland, New Jersey, an unlikely setting for revelation, one would think. The contemporary family is narrated by Willa Knox, wife of Iano Tavoularis, daughter-in-law of the irascible Greek Nick, mother of Zeke and Antigone (Tig), grandmother of Aldus (Dusty). Circumstances of life (loss of tenure at a previous job, the disappearance of a profession, the death of an aunt, the death of a daughter-in-law, the end of a romance) have brought them all together to live in an inherited, falling-down house in this small town, each of them trying (though no one harder than Willa) to figure out how to get back on their feet in the face of tragedy after disaster after unfortunate circumstance.

The second family, living at the same address in the 1870s, is headed by Thatcher Greenwood, a young man who started out poor and made good, married to a girl who started out wealthy and fell from status when her father’s failures and her marriage to Thatcher reduced her circumstances. Rose and her mother, Artemisia, live lives of constant discontent, filled with complaints about their straitened circum-stances (one of which is the drafty house falling down around them), while Rose’s little sister Polly is Thatcher’s one bulwark and champion within the family nest. If it weren’t for his unexpected friendship with his eccentric neighbor, self-taught botanist and biologist Mary Treat, his curtailed life and thoughts would have no refuge.

The political story of this book is in the confrontation of its protagonists with a shift in the wind, a change in society so profound that only a few can acknowledge it properly and understand its significance. In Thatcher’s case, it is the emergence of the discoveries of Charles Darwin, which make complete sense of the natural world, and which are being stifled at every turn by religion, fear, and willful ignorance. In Willa’s case, the realizations are brought home to her by her daughter, Tig, a small but mighty whirlwind seemingly sent to blow away all the illusions from Willa’s eyes. Tig would make a fitting companion for the Alexandra Ocasio-Cortezes of this world, with her insistence that capitalism is dead, that the old white men still clinging to growth as a signal of good are deluding themselves in the face of the real possibility of human oblivion within decades of this current moment. The metaphor of the house in which each family is living, which is literally falling to pieces, leaky roof to collapsed ceiling to failing floor joists, brings the whole message home.

But there is light within all this darkness, there is new life both botanical and human, there are hopeful interactions and solutions and triumphs. Ultimately, Unsheltered calls for living in a more authentic way, and the reader, if he or she is in sympathy with this message, can only rise to the challenge. 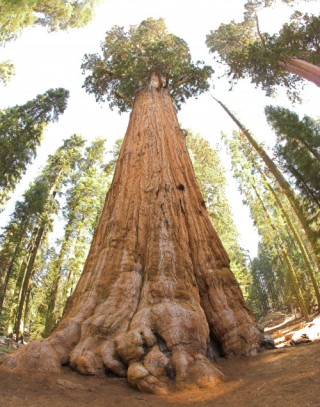 On Goodreads, one reader noted that “If there was such a prize this one might win The Most Polarizing Novel of 2018.” Being a fairly enthusiastic fan of Kingsolver’s (I disliked Poisonwood Bible but have loved everything else she has written), I found it hard to believe, when scrolling through the ratings, that some people gave this book a one- or two-star rating, in the face of my solid five. People’s reasons for these ratings varied, from “preachy” to “didactic and heavy-handed” to “too much dialogue.” My suspicion is that at least some of these readers were as at odds with the book’s message as were the general public in the novel with the realizations of both Thatcher Greenwood and Willa Knox, that the message made them uncomfortable, and they took it out on the book. As one who found it profoundly moving and distinctly eye-opening, I will have to say, read it for yourself and see where your vote falls.

“Unsheltered, I live in daylight.”