Speaking of best opening paragraphs—or lines—I just rediscovered one of them:

“I have been afraid of putting air in a tire ever since I saw a tractor tire blow up and throw Newt Hardbine’s father over the top of the Standard Oil sign.” 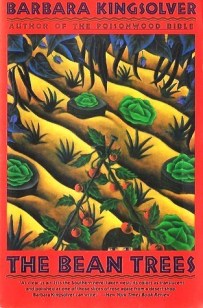 That’s the first sentence of The Bean Trees, by Barbara Kingsolver. I decided on a re-read, following my rediscovery of her as a writer with Unsheltered, last week. Since I already gave a brief review of the book in my “Fresh look: old book” series, I thought I would instead go into the appeals of the story, the reasons why someone might want to read it and you might want to recommend it, while the details are fresh in my mind.

Since I already shared it, let’s start with that opening line—what does it tell you about the book to come?

That’s a lot to get out of one sentence, and that is the gift of a writer who knows her characters and her story and gets right to them.

The protagonist of this book is immediately painted as a vivid and complex character. Within the first 30 pages, you know and understand where she came from and her connection with her past, you understand her love for her mama but her need to get away from Pittman County, Kentucky in order to find her place in the world, and you can even grasp why she is the sort of person who, when faced with the challenge of taking on an orphaned three-year-old, would flinch a little but then get on with it. If you, or the person for whom you are trying to find a good read, is a reader who loves character development, this book is a good bet. Every character in it has an individual, one-of-a-kind persona, and each is lovingly developed in whatever way he or she needs to be in relation to the main character. These are characters that you would recognize on the street if you walked past them.

The other thing this book has going for it is pacing. If you view it from a superficial standpoint, there are big swathes of it in which nothing much happens: People get and lose jobs, find places to live, make some friends, and live fairly mundane lives. But the overwhelming experience of this book is an exquisitely maintained tension: From the moment the Indian woman dumps the three-year-old in Taylor’s car and drives away, you realize that this is a never-ending source of questions that will pervade the rest of their story.

I should note here (as would a good readers’ advisor for this book) that although it stands alone and is in no way concluded as a cliff-hanger, the reader will probably experience a certain feeling of incompleteness without reading the sequel, Pigs in Heaven, and learning Taylor’s and Turtle’s ultimate fates.

Other elements of the book (and its sequel) that could be significant in appealing to a certain reader:

These are all ways to examine and perceive the requirements of the reader and match that reader with the story that will suit their taste, temperament, and interests. Think about some of the readers you know, and also consider the books with which you are intimately familiar; pair up the desires of one with the appeals of the other to see if you can accurately predict a good match. This is the gift of readers’ advisory.