On the Come Up

You always worry when the first book of a new author is as good and as much of a hit as was The Hate U Give (THUG), by Angie Thomas—sales, prizes, a movie, all for a first novel. You worry that she’ll be a one-hit-wonder, that the kudos for the first book will freeze her in her tracks, that she’ll never be able to up her game. But this book was definitely “on the come up.”

Having read both, I feel like maybe this one more directly expresses the personality and background of its author, that perhaps it was a project closer to her heart and to her authentic self.

THUG was about a girl who was being victimized by the system and figures out that speaking her mind and finding her voice are important. It’s about the giant and overwhelming exterior forces that shape a person, and what it means to go up against them. 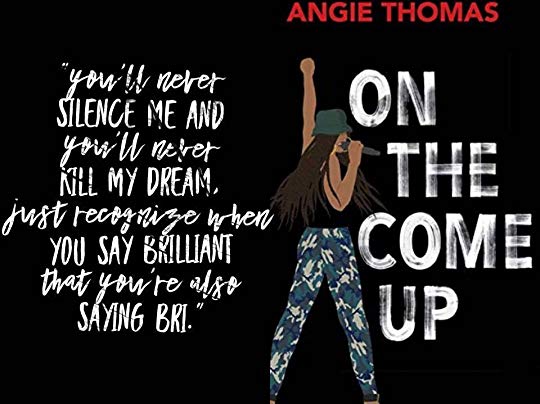 On the Come Up is the story of quite a different girl, one whose story is driven by the choices she makes while pursuing her dream. Although the books share some commonalities (project kids going to school in the privileged white world, conflicts between the traditions of home vs. the expectations of outsiders), this book is more intimate, with a tight narrative focused on protagonist Bri.

Bri Jackson lives with her mother, Jay, and her older brother, Trey. Her father, a rapper, was shot by a gang member when Bri was little; her mother, eight years clean after a drug addiction, is doing her best to provide for the family, working as a secretary at their church. Trey, who graduated from college summa cum laude, can’t find a “real” job and is working in a pizza parlor to help make ends meet until he can figure out a way to continue his schooling (he wants to be a doctor), but sometimes, when trying to stretch the dollars, it’s a choice between rent, food, or lights. Then Bri’s mom loses her job, and the desperation accelerates.

Bri is a talented rapper who wants to follow in her father’s footsteps, but using her own words and style. She is well motivated by a desire to take care of her family, but she’s also 16 years old, so she is impulsive, stubborn, and occasionally irrational as she acts out against the injustices in her life. She is also determined on getting what she wants, for her, for fame and security, for love. She is pushed and pulled by people who want to help her and those who merely want to profit by her talent, and she hasn’t yet figured out that if she’s not true to herself, none of it will work.

The incorporation of Bri’s lyrics give the story authenticity and depth. Writing prose and writing poetry (or lyrics) are such different skill-sets that it’s always impressive when an author manages both in the same work, and makes them work. Thomas is a gifted writer, and her exploration of the themes of systemic racism and inequality, social injustice, and gang violence are only exceeded by her skills at depicting them through utterly believable characters and a compelling story line. I’m impressed with book #2, and can’t wait to see what she’ll be up to next.

Here is the author herself, delivering some of Bri’s lines in the rapper “ring”:

Last night in Atlanta, I performed one of Bri’s verses. Thank you @wintersjulian for this video ❤️. Make sure y’all follow him and get his amazing book, RUNNING WITH LIONS.

READERS’ ADVISORY NOTES: Thomas’s books would obviously appeal to anyone looking for diversity in their reading material. But just as the so-called “problem novels” of the 1970s and ’80s fell by the wayside because they were too one-track, diversity can never be the only reason for a book to be judged “good.” Angie Thomas writes powerful stories of coming of age in an atmosphere of adversity. They are artfully written, character-driven, and satisfying. Most young adult readers who enjoy realistic fiction and like a scrappy, determined protagonist would appreciate and enjoy On the Come Up. The evocation of empathy with the targets of racial profiling is a big plus to a good story.