There are those authors such as Louise Penny, Michael Connelly, Robert Crais (mystery writers), or Maggie Stiefvater, Leigh Bardugo, Sarah J. Maas (young adult fantasy) who reliably turn out books in their ongoing series year after year. You can almost set your clock by Penny at this point. I know that every August, I will be reading another book about Chief Inspector Armand Gamache, and I am happier for it.

At the opposite end of the spectrum are authors who start with good intentions but for various reasons fail to deliver, sometimes for years or even decades. If you love their writing, you have to be willing to wait. You can’t hurry them; their process is their process, and it’s not going to go faster because a lot of fans are being petulant and demanding. So you have to love their writing so much that you are willing to re-read what you have, sometimes multiple times, until the next book finally appears.

One that comes to mind is The Queen’s Thief series, by Megan Whelan Turner, in which she wrote the first book (1996), we waited four years for the second, six years for the third, four more years for the fourth, and seven years for the most recent, which came out in 2017. Turner is promising #6 (which may be the final volume) for 2020, but given her track record, I am not holding my breath. But when it arrives, it will be greeted with cries of joy, and I will re-read the series for what, the fourth time? to celebrate its completion, because it is just that good.

Another is the dystopian fantasy known as The Obernewtyn Chronicles, by Australian writer Isobelle Carmody. She started the series while she was in high school. She finished it in 2015. She was 57 years old.

I loved that series so much that when the final book was published in Australia a year before it was due to come out here, I did a trade with a young Aussie friend on Goodreads. She wanted Cornelia Funke‘s third book in the Mirrorworld series, which was not released in Australia (and speaking of which, wondering when there will be a book #4?), and I wanted The Red Queen, so we traded addresses and mailed them to one another.

Finally, there are writers who start a series, go like gangbusters for the first few volumes, and then…nothing. The subject of this blog post is one of these, and it’s not to make any particular point but simply because it’s an amusing anecdote.

In the internet age, it’s a lot easier to make a personal connection with an author, and because of the ease of contact, it’s also more likely they will get back to you. Imagine being able to type a few lines on your computer keyboard instead of hand- or type-writing your response on actual paper, putting it in an envelope, addressing it, scrounging up a stamp…no wonder fan letters didn’t get such frequent responses!

Recently I was moved to make one such contact, due to some extenuating circumstances, and here below are the results. 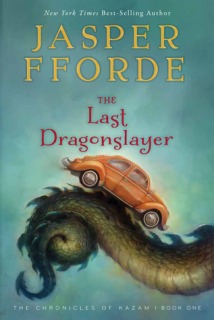 The email was to Jasper Fforde, author of the series The Last Dragonslayer. Book #1 came out in 2010, book #2 in 2011, book #3 in 2014, and then…nothing. A listing on Goodreads with a potential title and no book cover was the best one could find for the subsequent 5+ years.

TO: Jasper Fforde
FROM: A Fforde reader

Dude. Are you EVER going to write the last book in The Last Dragonslayer series??? Because in addition to needing to oblige this elderly librarian fan, you now have 14 English literature students in CHINA eagerly awaiting results.

One of my former book club kids at the library went on to study languages at Berkeley and then got a job teaching English literature to Chinese students in China. He wasn’t having a lot of luck raising their reading skills, so I told him to dump the classics and give them something to read that they would actually ENJOY, and recommended The Last Dragonslayer by you. I checked in with him today on Facebook and asked him if his students had liked the book. Here is his reply:

my literature students loved the book

they quote it often

i’m proud of them.

one student now refers to himself as the mighty shandar

As you can see, it is absolutely imperative that you get that one done. International relations depend upon it.

Dude, yes I am (and thanks for calling me dude).

It’s the book I’m working on now, and will probably be called something like: “Trolls v. Humans, a titanic struggle of good against evil, with ample breaks for tea and cake.”

I wrote him back:

I live in California, where it is required by law that you “dude” someone at least once in the course of an acquaintance. I like to get it out of the way up front.

I am supremely happy to receive this news. I will at once reassure the Chinese that they can expect it forthwith, and I promise a review on my blog of the new book plus the entire quarky series, once Trolls v. Humans lands among us.

Have YOU ever exchanged correspondence with an author? Tell your story in the comments…