I just read two books, both of which I would probably categorize as “relationship” fiction. I enjoyed both, but one receives a higher rating because the author knew when to stop. 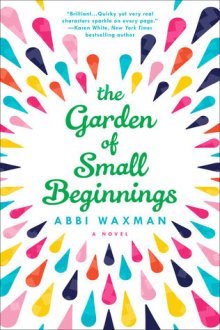 It wasn’t a total surprise that I would enjoy The Garden of Small Beginnings, by Abbi Waxman, since I had previously liked The Bookish Life of Nina Hill, her ode to reading and readers.
(I reviewed that book here.) But sometimes an author gets lucky with one book and doesn’t subsequently live up to expectations. I’m happy to say that wasn’t the case here.

Small Beginnings was one unalloyed delight. I might be a little prejudiced, because the protagonist and I are both artists, plus the subject of the book is gardening—a former hobby and a future aspiration—so it is natural I would have an affinity with this story. But subject matter isn’t enough to float an entire book, and this one had other advantages in spades (as in shovels full).

The book is about Lili, widowed in her 30s and left with two young daughters—Annabel, who is now seven, and Claire, now five. It’s been four years since her husband was killed in a car crash, and although she has recovered her equilibrium after a few months of total breakdown and has made a good life for herself and her daughters, she is determined not to yield to her family’s and friends’ pleas that she “get back out there.” Then, the publishing company for which she is an illustrator decides that Lili will be the artist who takes on a new book on vegetable gardening, and her boss asks that she attend a six-week gardening class to familiarize herself with the subject. Lili is happy to comply, and takes along her sister, Rachel, and her two girls to the class. She is surprised to discover a hint of chemistry with the solemn but charismatic Danish instructor, as well as some unexpected but welcome camaraderie with the other students…

The characters in this story were completely engaging, the scene-setting was just right, but the ever-present humor was what took it over the top. So many writers do a poor job with children, in particular, but Lili’s two girls exhibited that perfect mix of literal and precocious that makes girls of five and seven years old both maddening and hilarious, while each embodying a distinct personality. I loved the coming together of the mismatched crew at the garden class, and how everyone’s assumptions about each of them was busted in some way as the story progressed. The romance was in just the right measure. The gardening tips between chapters were bonuses I enjoyed…but to make it truly perfect, the publisher should have engaged an illustrator of Lili’s caliber to add in some drawings! That’s pretty much the only flaw I can find.

The thing I liked best about this book (especially in retrospect after reading the next one on my list) was that it lived up in every way to its title: Small beginnings were made on some changes for all the characters and Lili in particular, but the author didn’t feel the need to either belabor things or to unnecessarily wrap things up. She trusted the readers’ imaginations enough to give them a small amount of satisfaction and let them extrapolate the rest for themselves.

By contrast, my next choice, Things You Save in a Fire, by Katherine Center, was positively heavy-handed. It didn’t start out that way—in fact, it was an enjoyable read for the majority of the book, although the protagonist did tend to take herself too seriously.

Cassie Hanwell, a female firefighter, is excellent at her job because she allows for no distractions. Her temperament has been shaped by an unfortunate event that scarred her as a teenager, and this single-minded attitude has served her well for 10 years; but in a sudden confrontation with the author of her tragedy, she loses control and changes the trajectory of her career. She is forced to leave her comfortably familiar job in a progressive fire department in Austin, Texas to take on the challenge of being the only “lady” on the crew of an old-school, out-of-date fire house in a small town outside Boston.

Her choice of this particular place is due to a request from her estranged mother, who is having a health emergency and has asked Cassie to move in with her and assist her until she gets back on her feet. Cassie, compelled by her gaffe to make a change, complies by finding an assignment near where her mother lives, and spends the next few months equally uncomfortable in her home and work life as she reunites with the mother who left her and fights for a place among some tough competition.

Then she starts having romantic feelings, for the first time in her life, and even more inconveniently, it’s for the rookie at her fire station…

This book almost got top marks from me, but the author just couldn’t resist an epilogue. The book was finished before the epilogue—everything that needed to happen had happened, and the rest of the stuff could be left up to the reader to decide, just as in Waxman’s novel—but Center just couldn’t let it be. She had to wrap things up with a bunch of ribbon and some great big showy bows, by spelling out every little thing and bringing a conclusion to each and every character, situation, and psychological issue. Included in there were some sappy scenes, some completely ridiculous reformations, and a few comeuppances of bad characters that simply wouldn’t happen outside an author’s fantasy life. I have to say, it kind of ruined the book for me.

The difference between an author who knows when to quit and one who doesn’t can be as slight as 20 extra pages, but what a difference it makes. After all, isn’t imagination a big part of enjoyment when it comes to the peculiar habit of reading?