As I mentioned in my previous post, I recently spent some time re-reading the four books and two novellas Sharon Bolton wrote about Detective Constable Lacey Flint, who works for the London police, sometimes with a murder team, other times undercover and, in one book, as part of the River Police who patrol the Thames.

Lacey is an iconoclast, part of that subgenre of mystery characters known as loners. She attempts to be colorless and matter-of-fact, to keep her head down and fit into the team; but she has so many secrets of her own to keep that it’s a relief to be able to focus instead on the secrets of others, on the methods and madnesses of the serial killers she hunts. As a young, new, and inexperienced detective, Lacey is extraordinarily unlucky about attracting the attention of these criminals to herself. There is some sort of affinity between Lacey and her prey that causes some among her fellow officers to be over-whelmed by the suspicion that she herself is the criminal they are seeking. 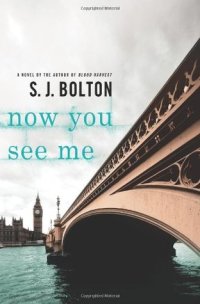 In the first book, Now You See Me, Lacey serves as a source for “her” team on the history of the Jack the Ripper killer, whose scenarios, methods, and exploits the murderer they are now seeking seems to be mimicking. What becomes clear as the team follows this killer further into the labyrinthine twists and turns of serial murder, however, is that the Ripper similarities are camouflage for something much more sinister, and that Lacey is at the center of the story. The rarity of this and the other books in the Lacey Flint series is that the mystery keeps unfolding in each, all the way to the last page. 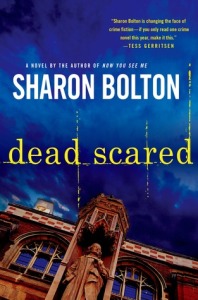 In Dead Scared, Lacey’s sometime mentor and reluctant crush, Detective Inspector Mark Joesbury, asks her to go undercover as a student at Cambridge University to explore the inexplicable uptick of bizarre suicides on that campus. Given her fragility since the recent end of their last case, her boss, Dana Tulloch, and other members of the team are concerned that Lacey will be overwhelmed by the necessity of playing this vulnerable part. But Joesbury thinks she’s up to it, and she’s the obvious choice, given her youthful appearance, so she immerses herself in campus life and tries to discover more about the raft of lonely and insecure students who chose such unconventional methods of death. It’s an insane plot, fascinating (and misleading) to the last page, and full of peril for more than just Lacey. 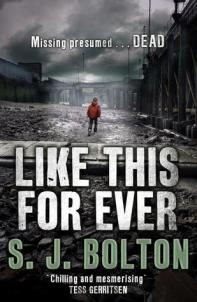 In Like This, For Ever, titled Lost in the United States, Lacey is on leave from her job, and considering not returning to it. She hasn’t been able to process the jumble in her head created by her last case, and is spending most of her time obsessively working out and taking long late-night walks to exhaust her enough for sleep. I can’t say too much about the plot of this one, because it takes an unusual twist at about 85 percent that I don’t want to reveal, but it’s written with Bolton’s usual skill and panache. Because Lacey is on leave, she is not directly involved in most of the police investigation of a serial killer who is targeting young boys. But the usual crowd (Stenning, Anderson, Mizon, Tulloch, Joesbury) are all on hand, and Lacey inevitably gets drawn in by an unexpected personal involvement with a seemingly peripheral character, the boy next door. There’s lots of suspense, with multiple red herrings and a great resolution.

A Dark and Twisted Tide once again involves Lacey Flint in spite of herself. After her leave of absence, instead of working as a detective she has gone back to uniform as part of the river police, hoping to return gradually to the force, but quiet time is not in the cards. Only Lacey could be out swimming at high tide in the Thames River (a hobby she has taken up since moving onto a houseboat) and discover a body floating in the river wrapped carefully in white burial cloths. Soon it becomes obvious that she didn’t find it by accident, that once again someone is focused on her, trying to draw her in. Being Lacey, she lets herself be drawn. This one, I have to say, was a little weird in spots even for me—but I enjoyed it. I had two problems: First, I think it’s time for Bolton to take up a new story line with regard to Lacey—not every case can relate specifically to her! Second, the long-drawn-out non-courtship of Lacey and Detective Mark Joesbury can’t be prolonged beyond a point, and I think we just hit that barrier as readers. To quote my British friends, at least give us a little snogging!

The two novellas that Bolton wrote for this series exclusively as
e-books are equally compelling and mysterious. In the first, If Snow Hadn’t Fallen, something happens in Lacey’s neighborhood that weighs on her mind, because none of the explanations for it add up to what the killers attempted to convey. The second, Here Be Dragons, which falls at the end of the series, is a long-needed exposition of Mark Joesbury, detailing one of his undercover cases and leaving us, finally, with a cliffhanger regarding his relationship with Lacy. There have been two stand-alone books written and published since the #4.5 novella with the tease at the end; when, oh when, will we discover the outcome?

One of the things I like about this series is that Bolton has nicely combined two separate mystery subgenres. Her protagonist is a lone-wolf type, and we get all the fun that goes along with that; but the books are also pretty comprehensive police procedurals, detailing all the myriad ways in which the police go about solving a murder. This gives the lone-wolf concept a nice, solid background on which to rest.

These books are beautifully written, with a wealth of detailed description of the characters, the neighborhoods of London, and the beauties of the natural world that make themselves known even
along the dreariest parts of the river Thames. Both the characters
and the mysteries are sufficiently unique and well developed that
I would venture to say if you are a Tana French fan you would love these books.

They also remind me of Carol O’Connell’s series featuring Kathleen Mallory: Lacey Flint is likewise a damaged, somewhat amoral police detective who does everything according to her own instincts regardless of policy and logic, and gets “up people’s noses” even though she has no desire or intention to do so. I think Bolton has been wise, however, to vary her oeuvre with completely unrelated stand-alones; O’Connell’s Mallory has a distressing sameness from book to book as her series unfolds, and Bolton could fall into that trap with Lacey if she focused solely on her as a protagonist. That’s not to say I don’t want more of Lacy, because I do! But I will wait at the pleasure of Ms. Bolton and meanwhile enjoy everything else she has written, which is considerable.