I’m struggling with how to convey my reaction to this book. It’s Chosen Ones, by Veronica Roth, her first “adult” novel (she’s famous for the Divergent YA series). It’s almost like there were three books contained within this one, and I really liked one of them, I mostly liked but was confused by the second one, and about the third one I was quite ambivalent. (Not in that order.) 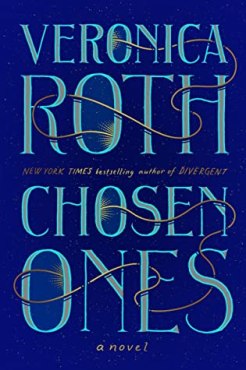 I like the concept, which is, What happens to heroes after their mission is complete? They have done their job and defeated the evil force, and now what will life look like? But the concept is also part of the problem: Because the book is being written 10 years after the central event—the defeat of the Dark One—that was the major turning point in the five Chosen Ones’ lives, we get a confusing and contradictory look at those events, depending on to whom we are listening. It’s obvious that the trial had a devastating effect on at least some of these people, but a couple of them—Matt and Esther—seem to have recovered just fine and are using their fame to good purpose. The others—Ines, Albie, and Sloane—seem permanently stuck. Albie and Sloane, who were held and tortured by the Dark One, suffer cruelly from PTSD and are awash in misery and guilt. When the book opens, Sloane has just requested some top secret documents from the government about the events in question because, even after all these years, she feels like she doesn’t know either the truth or the scope of what happened, and she needs to make sense of it so she can move on. The documents do add to the narrative (and it’s fun to have them inserted into the text), and they do explain some things, but they bring up as much as they explain.

Anyway, the Dark One has been vanquished, the five are trapped in their celebrity stereotypes, doing the rounds of public appearances for such things as anniversaries and dedications, and everyone is in a holding pattern. Then, a tragedy brings them together, and they are suddenly being challenged to do battle again, with a foe possibly even more powerful and terrifying than the first.

At this point in the book, right after a major transition, things kind of come to a halt. There’s a lot of talk-talk about the sitch, multiple training scenarios for new techniques to vanquish the enemy, and the narrative gets a bit turgid. Then Sloane, ever the curmudgeonly rebel and loner, decides to step outside the box, and in Part Three, things finally get lively.

I have read many books in which it is necessary to set up a past, to explain current scenarios, and then move into the present-day action. This book doesn’t do a great job at that. Part of it is that we are too much inside people’s heads (mostly Sloane’s) and it’s a mess in there. Part of it is that there is not much focus—no linear story-telling here, you’re supposed to pick it all up on the fly as events and people jump around, and sometimes that works and sometimes it doesn’t.

I did end up liking the book, mostly because of two characters (Sloane and another I won’t mention because it’s a spoiler, but he’s way cool). When they finally begin to figure things out, plan, and interact, the pace accelerates and we get not only some action but also some surprising information that causes the rest of the story to suddenly make more sense. But it seems to me it’s way too long in coming,
and a less motivated reader might give up before arriving at this point in the book.

There were also some inexplicable things: In mystery writing they always tell you, Don’t mention a gun unless it gets used in the next scene. The same goes for characters, and one person in this one who you rightfully expect to be major (or at least present!) simply disappears from the action, with no comment or explanation, despite her supposedly central role. There are also some “reasons” for various phenomena that are patently absurd, but…it is a sort of a comic book of a story, after all. Still, it’s nice when science fiction actually adheres to some consistent form of science, even if it’s invented.

Finally, this book is numbered “Chosen #1” in Goodreads, which would imply a sequel; but there is no cliffhanger or any sign at the end that a sequel will be forthcoming or even necessary. Perhaps that’s a good way to handle it—since there is no foreshadowing, the sequel could be literally anything the author pleases. It just seemed weird not to have at least a few ominous threads left dangling.

I would recommend the book, because the ideas are ingenious and at least two of the characters are compelling, ironic, and occasionally darkly humorous. And I will read the sequel, because this one engaged my curiosity sufficiently about where the story will go next. But it’s definitely a mixed bag.