In my previous post, I posed the question, “Can the setting of a story (a particular place or atmosphere) be a sufficiently appealing element to carry a book?” (Or something like that.) To research the experiment,
I read books by three of the authors recommended to the woman on the “What Should I Read Next?” Facebook page who requested “books that take place at the beach.”

Author #1 was Karen White, and I read her book The Sound of Glass. The title comes from the wind chimes constructed from pieces of polished beach glass that the original owner of the house depicted in the novel made and hung from the rafters all around. 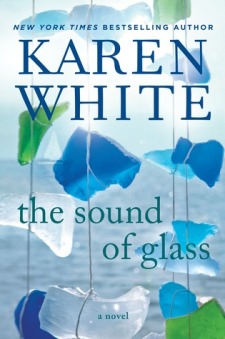 The book is set in Beaufort, South Carolina, which the author classifies as part of the “Outer Banks” (although Wikipedia says those are “a string of peninsulas and barrier islands separating the Atlantic Ocean from mainland North Carolina”).  Suffice it to say, the setting is one of open beaches and also of protected swamplands characterized by flat-bottomed boats cruising above pluff mud, and trees covered in Spanish moss. Although there is a minor plot detail involving one of the protagonists’ fear of water, the setting doesn’t have a lot to do with the book, beyond providing evocative sound effects and scents unfamiliar to the one protagonist, who hails from Maine. Scene-setting mostly came down to that character, Merritt, complaining about the stifling heat. A lot.

The story in brief: Merritt’s husband died two years ago. She has recently discovered that his grandmother left him a house in South Carolina, and since he is dead, she inherits. She decides to upend her stagnant life in Maine to go live in it. Shortly after she arrives, so does her stepmother, who is a scant five years older than she is and has a 10-year-old son. The stepmother pleads poverty and asks to stay and Merritt reluctantly agrees, although her father’s marriage to this woman was the reason for her 12-year estrangement from him (he is also now deceased). The two begin to work out their relationship with one another, but it’s complicated by rather large secrets on both sides.

Someone on Goodreads described this book as “relationship melodrama,” and that about sums it up. The thing is, the bones of a good story are here: estranged family who find each other amidst personal crises. But Merritt (the buttoned-up Maine girl), and her counterpart, Loralee (the brash Southern blonde with the pancake makeup), are both such stereotypes that I found it hard to relate to them. Better than the two protagonists, I liked Loralee’s kid, Owen, and Merritt’s doctor/brother-in-law, Gibbes. They were less prone to both drama and cliché, and I think their characters show of what this author is capable if she would quit dropping into the easy channels dug by predecessors.

The secret Loralee is keeping is obvious to everyone but Merritt, but the way she goes about ingratiating herself and her son with her stepdaughter is pretty ingenious. If the story consisted solely of this plot, I think I would have liked it better. Instead, we had to do a whole convoluted study of Merritt’s damaged psyche and how it got that way, and although exposing some of the issues was a worthy goal, her protracted whinging was exhausting. And her ultimate secret, the one that connects grandmother with grandsons with widow, is patently ridiculous.

A comment on writing: When I am reading a book, I subconsciously give the reading the same tests that I give my own writing, one of which is not to use the same descriptive word twice on the same page (let alone in the same sentence), and yet that happens over and over again in this book. The author has the potential for good story-telling, with evocative images and powerful characters, but sloppy writing (uncorrected by her inattentive editors) and tendency to drop into cliché operated for me against enjoyment. I probably will not read any other books by Karen White.

The second author whose work I sought out was that of Elin Hilderbrand, a perennially popular name associated with “beach read” in the Facebook group. I scanned her list of offerings on Goodreads and selected a book that had uniformly higher marks, since some of the others swung wildly between two stars and five. The one I ended up reading was The Identicals.

I was immediately captivated by the slightly tongue-in-cheek comparison between Nantucket and Martha’s Vineyard in the prologue, citing the benefits of each and the detriments of the other from the residents’ point of view. It was a great set-up for the story: While Nantucket and Martha’s Vineyard may look to the rest of the world like similar places, to the natives they are worlds apart, even though that distance is a scant 11 miles. Similarly, while twins Tabitha and Harper are identical enough to fool others even at age 39, they are completely different in their life choices and affects.

The story in brief: Twins Tabitha and Harper have been estranged for many years, for various reasons. Harper lives on Nantucket near their father, Billy, while Tabitha assists in their mother’s previously successful but now waning design business/dress shop. Things suddenly get stirred up: Billy dies; Harper’s affair with his doctor becomes a common topic of island gossip; and Eleanor (their mother) falls and breaks her hip. Add to that mix Tabitha’s precocious and trouble-making 16-year-old daughter, Ainsley. Harper needs to cultivate a low profile, Tabitha needs to care for their mother in her recuperation but is at her wits’ end with both her teenager and her dress shop, and something needs to be done about Billy’s ramshackle house on Nantucket. All these circumstances combine to make the twins grudgingly reach out to one another for assistance (facilitated by Ainsley, who is dying of curiosity about their lack of relationship) for the first time in decades.

Part of the reason why this plot line works is that the author herself (in the guise of her various narrators) initially sets it up for derision by comparing the separation of the twins at age 17—one going with “Mommy” and one with “Billy” when their parents divorced—to the Hayley Mills/Lindsay Lohan Parent Trap plot. She then uses their wholly different upbringings—Harper’s on Nantucket as a laid-back, casual evolution into an underachieving adulthood, and Tabitha’s on Martha’s Vineyard (and in Boston) as an uptight, socially restrictive one with high expectations of her performance—as a parallel for the respective towns. It was cunningly written.

I also liked that although there were important elements of mistaken identity “hijinks” and romance in the book, the story was by no means restricted to those plot lines and in fact was much more about the obstacles to familial love and how to overcome them. The back stories were also credible, and gave the story depth. Based on this book, I would read another by Hilderbrand.

As far as the influence of setting, in addition to paralleling elements of the story it also made me wish for sea wind in my hair and a big bowl of clam chowder in front of me on the table. The atmosphere definitely both contributed to and influenced the plot.

For my third book, I chose Sunset Beach, by Mary Kay Andrews, an author appearing on the Facebook page and also mentioned to me as one fitting into the category by my friend Patrice.

The story in brief: Drue Campbell has just gone through her mother’s protracted illness and death when her estranged father, who left them 20 years ago, turns up with a proposition: Drue has inherited her grandparents’ ocean-front cottage in the same town where Brice Campbell has his lucrative personal injury law practice, and Brice thinks she should move into the cottage and take a job at his firm. Complicating the issue is his new wife and office manager, Wendy, who also happens to be Drue’s 8th-grade frenemy. Drue is down on her luck and can’t afford to say no, but she agrees with an ill grace and initially resents both the job and her father and “stepmother.” Then, she is arrested by the plight of one of Brice’s former clients, whose lawsuit over a suspicious death didn’t receive the attention it deserved, and decides to investigate.

In this book, Drue’s former hobby (kite-boarding) and her nightly walks on the beach and swims in the ocean from the venue of her derelict cottage do give a beachy atmosphere to the book. But I would definitely not call this one “just” a beach read. Although the opening scenes paint this as “relationship fiction” with the reuniting of Drue with her absentee father, the scenes between them are sometimes shallow, with Drue coming across like a snarky teenager. Brice himself is a bit of a cardboard cutout—bland and not particularly compelling—while Wendy (the new wife) is a cliché of a shrew. But the rest of the book—in which Drue starts out working as an information-taker over the phone for her father’s legal practice and ends up (after taking an interest in an old case with an unsatisfactory resolution) as a bull-headed private investigator—is much more compelling. While there are bits of romance and reconciliation here, the main story is the mystery and this is how I would recommend the book if I were to suggest it to someone. Based on this book, I would read another of Andrews’s, although it could have done with a little more depth in the relationships before switching to the mystery.

Of the three books, I would say that only Hilderbrand’s reinforced the theory that setting can be powerful enough to carry a story. Although the beach hotel culture does become fairly important in Andrews’s tale of betrayal and murder, both the other books could probably have been set anywhere without it feeling like something essential was removed from the plot. In Hilderbrand’s, plot and setting were intertwined, which is the ideal when setting is an issue.

As for my other premise, that people who like a “slow build” in pacing in one genre will enjoy the same in others, that will have to wait for another day and some reporting back from other readers!