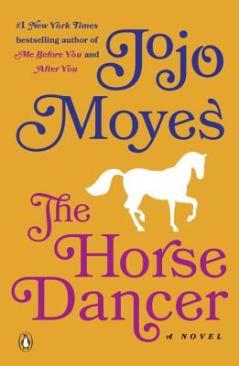 I decided on a re-read this week, and picked one of JoJo Moyes’s lesser known books, The Horse Dancer. I enjoyed it enough the second time around to want to revisit (for my newer readers) the review I wrote in 2019 when I first read it.

There are three intertwined stories in this book—one in the past, the other two present-day. The first involves Natasha and her soon-to-be-ex-husband Mac. Natasha is an up-and-coming attorney in the area of child protective services, and channels all her repressed feelings about the end of her marriage into her work and her tentative new relationship with a shiny partner at her firm. Mac is a freelance photographer, and appears to be fairly happy-go-lucky and irresponsible next to the upright and uptight Natasha, but seems to have major regrets about the end of the relationship. The two are in the process of sorting out their mutual possessions and financial issues on the way to divorce when their paths cross with Sarah.

Sarah is a 14-year-old girl who has two major loves in her life: her beloved grandfather, Henri, with whom she lives, and her horse, “Boo.”  Her grandfather was, in his youth, a professional rider for the prestigious Cadre Noir, a French dressage academy, but he gave it all up to come to England to marry Florence, the love of his life, recently lost to cancer. Sarah’s dream is to follow in her grandfather’s footsteps and ride with Le Cadre Noir in Saumur, France. Meanwhile, she and her grandfather train the horse in the shadow of an old railway siding in the seedy part of London, where they stable the horse with Henri’s friend, Cowboy Joe. When something terrible happens to Henri, Sarah discovers the fragility of her situation as a child with too many adult responsibilities, and tries her best to deal alone with all the potentially terrible outcomes.

I found this book tremendously moving in several areas. The relationship between Sarah and her horse brought back memories of being that age and wanting that special partnership so badly. (My grandfather, an impulsive bidder at auctions, actually gave me a horse for my birthday when I was 12—an unbroken two-year-old palomino
stallion—and my parents, dismayed by the thought of dealing with the housing, feeding, and exercising of him from the comfort of our suburban lifestyle,  made him take it back. I can hardly remember ever feeling more heartbroken.) The scenes that depict the tie between Sarah and Boo are so viscerally and immediately written as to be impossible to resist.

The interplay between Mac and Natasha was painful and confusing, and there were parts I flat-out had trouble believing, but ultimately the idea of the walls we build to protect ourselves that do us more damage than those we built them against resonated with me. The picture Moyes paints of a teen girl who depends on her grandfather and no one else, and of what happens to her when she is thrown on her own resources and believes she must cope all alone, is poignant, real, and frightening. The back story of the grandfather’s youthful experiences in Le Cadre Noir gave the book additional legs. All in all it was a satisfying and touching, albeit somewhat dark, read.

This is a book that is written for adults, but it explores the adult-child (or adult-teen) relationship from both sides, given that it shows both Natasha’s and Sarah’s views of the proper way to deal with the situation in which they find themselves; and I think that there are teens who would appreciate and even benefit from reading this book. Natasha has to transform her view of Sarah as a frustratingly opaque, surly compulsive liar and see that she is a child adrift in an adult’s world who is convinced she has to be as strong and resourceful as an adult; while Sarah has to get past her view of Natasha as a controlling authority figure and see that she is doing her best to be helpful even though Sarah is keeping the bulk of her life secret from everyone. The thing Moyes gets right is that final push through misunderstanding that is essential to a true and lasting love, whether it be between a couple, a parent and child, friends, or a girl and her horse.