There are, particularly in the fairy tale tradition, many stories of children who disappear, some never to return, while others go away for awhile and come back but are never quite the same. Taking their cue from that old chestnut “Rip Van Winkle” are such series as the Chronicles of Narnia (a door at the back of the wardrobe), Cornelia Funke’s Mirrorworld (a mirror in the study), and others that perpetuate stories of strange worlds accessed by odd little doors and windows, burrows and mirrors that lead somewhere….

But finally, in Every Heart A Doorway, by Seanan McGuire, we have the bringing together of a group of “the returned” to Eleanor West’s Home for Wayward Children, a boarding school run by a schoolmistress who went away, herself, to another world when young and therefore can empathize with their plight, stranded back in this one. Bewildered parents try to get their blessedly restored children to behave as they used to, but the children spend all their time longing to go back to the worlds where they finally felt at home, and the desperate parents send them to Eleanor, hoping for a miracle. But they may not get the one they’re wishing for….

This book is truly magical. Furthermore, the writing, the descriptions, the characters, and the mystery are all both lyrical and inspired. And although the description sounds old-fashioned, the telling of it is anything but: It’s a touching story about unconditional love.

The first thing I did as soon as I finished this book (which didn’t take long—the books in this series are novella-length) is to immediately read the next, Down Among the Sticks and Bones. That one turned out to be a prequel, since it details what happened to two of the characters (twin girls) from Every Heart A Doorway, immediately before that book started. Jack and Jill’s sterile background and their sojourn in the forbidding world of the moors dovetailed nicely into the first story and was such a satisfying explanation of their behavior in that book. The essence of this one is that there is no one way to be a girl, and there is no one way to love. 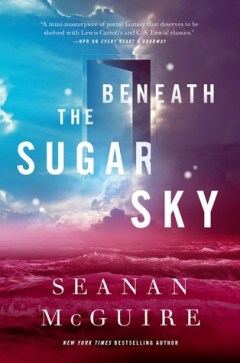 The third tale, Beneath the Sugar Sky, was as much a tiny jewel-like masterpiece as the other two, but it was both everything I was expecting and nothing like what I thought it would be, which is the best that you can wish from a book.

We meet characters from the first two stories—Christopher, who longs to return to his love, the Skeleton Girl, in a world best compared to an eternal celebratory Dia de los Muertos; Kade, who is preparing to be Aunt Eleanor’s successor at the Home for Wayward Children; and Nadya, who has been at the school going on five years but hasn’t yet given up and gone home. We also meet some new characters: Cora, the fat girl and champion swimmer, who yearns to return to the world where she was a mermaid with blue and green hair who never had to leave her element, the water; and Rini, who bursts upon the teens at the school like a revelation of what a Nonsense world can produce, Rini with her candy corn eyes and naïveté, in search of her mother, Sumi. This cast accompanies Rini across several worlds, being careful not to become stuck in any of them, intending to help Rini but also secretly hoping to find their several ways back to their own doorways. This book contains a powerful message about loving yourself, no matter your shape, size, or individual peculiarities. 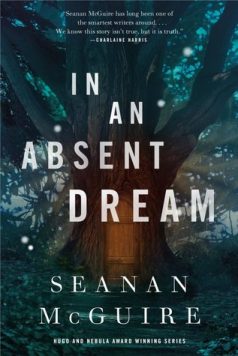 The fourth book, In An Absent Dream, which was just released January 9th, is being confusingly billed on its flap as “a stand-alone tale in the award-winning Wayward Children series.” Although this is misleading (it is definitely a part of the series), if you read the first book and then jumped immediately to the fourth, you would still feel yourself firmly situated, since it cites nothing and includes no one from books two or three, but does solve a mystery presented in the first book.

Katherine Lundy is only six years old when she realizes that her entire life has already been planned out for her. Her father is the principal of her school, which ensures she has no friends; left to her own devices, she sees herself continuing on, quiet, polite, studious. She will sit in her room by herself, reading her books, until one day maybe she will become a librarian and then a wife and mother, as is expected by her family. But even at six, Katherine knows this isn’t the life she wants, and one day, she finds a door, her door, to somewhere she can be herself. (My favorite portal yet, btw.)

It’s a wonderful, evocative, and bittersweet chapter to this ongoing story; once again McGuire provides the language pictures to carry the reader completely into the worlds she paints. I couldn’t put it down, and I strongly suspect I will re-read this series more than once. McGuire has really struck a nerve with the idea that for those who feel like misfits in their own lives, there may exist doorways into places where they feel completely themselves, where they are loved, wanted, needed, where they belong. The yearning to get there lives with some people their whole lives, but in McGuire’s books, some of the people actually get to experience this coming home, for a little while—or, for a lucky few, forever.