I have read two books recently that dealt with the ideas, emotions, and results of bigotry, both focused on the Muslim experience. One was, somewhat weirdly, the third volume in the Chocolat series, by Joanne Harris, called Peaches for Father Francis (I reviewed the other two books earlier on this blog); the other was a newish young adult novel, A Very Large Expanse of Sea, by Tahereh Mafi.

The first was a story of clashing cultures trying to co-exist in the same small French village, while the second was the devastating effect high school ignorance has on one Persian Muslim girl in a sea of white kids, one year after 9/11. Both were powerful statements and, while quite different, arrived at some of the same conclusions. 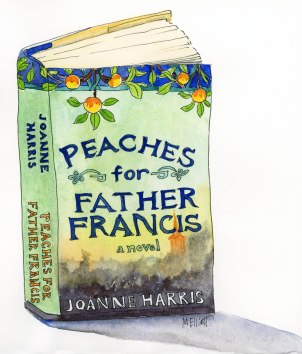 In Peaches for Father Francis (otherwise sold as Peaches for Monsieur Le Curé), it is eight years after the events of the original book Chocolat, and Vianne and her two daughters have made a life for themselves in Paris, floating on the Seine in a houseboat with the traveler Roux, father of Vianne’s daughter Rosette. Then comes in the mail a posthumous letter from Vianne’s old friend Armande, via her grandson, Luc, summoning Vianne back to Lansquenet because “someone here needs you.”

It’s August in Paris, which means it’s stiflingly hot and empty except for the tourists, so Vianne decides to indulge the impulse to take Anouk and Rosette for a holiday in the country. Roux somewhat surprisingly decides to stay behind, in Paris.

What Vianne discovers when she arrives is that the derelict housing on the other side of the bridge from Lansquenet, near where the travelers used to dock their boats, has been appropriated by a rather large immigrant Muslim community, the Maghrébins, and although their occupation had initially been accepted with cautious enthusiasm by many of the other villagers, now factions have broken out on both sides of the river, and friction is growing. Somehow, despite their formerly oppositional roles, the solution comes down to a cooperative relationship between Father Francis, the town priest, and Vianne to solve the impasse and narrowly avert a war.

The characters and situations in this novel are masterfully drawn. While it still retains a bit of the magical realism for which the first book is known (the shadow of Pantoufle still follows Anouk), this third tale is deadly serious in its exploration of warring cultures, tolerance, and understanding. It clearly and sometimes horrifically demonstrates the degree of misperception that can exist when people make shallow and blatant assumptions about one another and fail to take either human nature or love into account.

The young adult book, A Very Large Expanse of Sea, was more problematical for me, partly because it relies so heavily on high school tropes, which become wearying after so many teen novels based on them; but the fact is, they do still exist, and are potent, especially for the teenagers experiencing them.

I found the protagonist, Shirin, confusing because she is so vulnerable and yet so hardened in her angry cynical belief that no one will ever give her a fair shake. Several things baffled me about her character, the first being that she spends almost a hundred pages (basically a third of the book) being angry about how people react to her because she covers her hair with the hijab; then, when asked why she wears it, her reason seems inadequate. Her parents don’t require her to wear it, and in fact questioned her decision to do so; while she celebrates Ramadan with her family, she isn’t particularly religious and doesn’t otherwise have any kind of spiritual practice; and what she finally reveals to her new boyfriend is that wearing the scarf is a control issue for her—she gets to decide who can see her hair. I was kind of stunned that she would put up with the treatment dealt out to her post-9/11 for such a stubborn but singular reason.

While acting and talking like she doesn’t care whether anyone sees and knows her or not, she seems completely blown away when her brothers’ friends, who are in the siblings’ break-dancing club (the side story of a break-dancing hijabi was one of the best images of the book), tell her she’s beautiful. This scene may have been constructed so that the black friend, Jacobi, can subsequently tell her that she’s also scary and mean, and that she has let her anger convince her that all people are assholes when in fact they’re not and she needs to let go of that belief; but the degree of her investment in her looks, after rejecting every superficial nice remark and compliment from absolutely everyone, felt a little off.

There is one raw-ly honest moment in the book when a teacher embarrasses Shirin in class and then keeps poking at her (after she cuts his class for three days) to find out why she’s so upset that calls out white privilege and is probably the penultimate speech Mafi wrote the book in order to include:

But there are also a couple of bigoted remarks by Shirin herself—like when she somewhat snottily hopes that the boy who likes her will just give up and “find a nice blond girlfriend.” Ultimately, though, the book does a good job of breaking down stereotypes and misperceptions on both sides of the divide, and provides along with it a sweet, satisfying, and occasionally swoony romance. Most significant, perhaps, is the reaction to the book by this former teenager on Goodreads:

“Y’all mind if I cry? because if you’d told 16-year-old me that one day I’d read a NYT best-selling book where a Muslim Hijabi teen gets her own coming of age story and her own big romance instead of being the token (stereotyped) minority character or some cultural prop used only to further the writer’s favorite white girl…it would have made a world of difference.”

(Despite searching its pages, I have not figured out the title of the book: The boy protagonist has the unlikely first name of “Ocean,” but other than that, there’s no reference to a large expanse of sea. I’m sure it’s hugely symbolic and that I’m just being obtuse; if you get it, please enlighten me!)

← A book with heart
What are you reading? →