Almost a month ago now, I read two thrillers by author B. A. Paris that I enjoyed quite a lot. At the time, I mentioned that I still wanted to pick up her debut novel, recipient of many rave reviews on Goodreads, and I put it on hold at the library. On Wednesday I had a bunch of errands to run over in North Hollywood and decided that when I was done with them, I would treat myself to breakfast at Jinky’s in Studio City. I had heard good things about the café and wanted to try it.

When I was only a few blocks from the restaurant, I suddenly realized that I had no book in my purse! I had finished Kate Morton’s tome yesterday, and hadn’t started anything new yet. I don’t know how you feel about eating alone; I don’t mind it a bit, but the catch is that if I’m going solo, I must have a book to read with my breakfast! Fortunately, I was only about a mile from the Studio City Bookstar (Barnes & Noble), so I turned right instead of left, parked, dashed, remembered my desire to read Paris’s book, grabbed Behind Closed Doors off the shelf, paid, and was back in the car five minutes later on my way to Jinky’s. 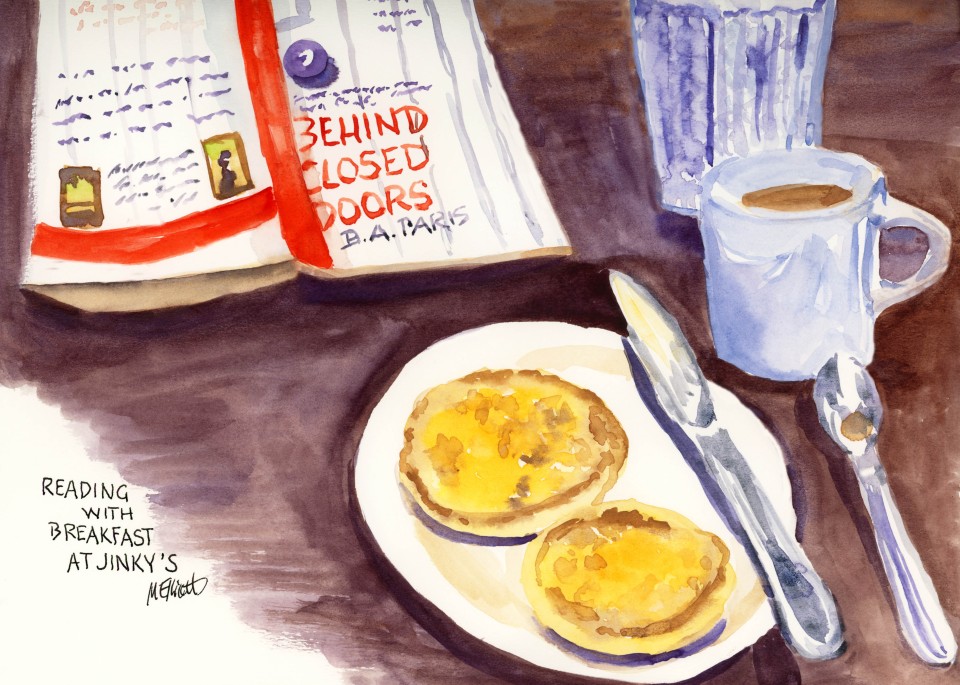 What a story! Unlike the slow build-up of her other two books, you find out what’s going on between Jack and Grace almost immediately; even the opening scenes, when you’re still not quite sure, are redolent with a vague feeling of dread and anticipation. The picture the pair paint for the world is of a couple madly in love after a long wait for the right person (Grace is 32, Jack is 40, and neither has ever been married). Jack is a successful attorney who is revered for his work championing battered wives against their abusive husbands, and he has never lost a case. Grace, post wedding, has quit her job to become a charming and talented housewife and hostess for Jack’s friends at perfectly cooked and served dinner parties. But a nervous twitch here and there lets you know there’s something not quite right about the pair, although you don’t dream of the extent to which the picture is false.

Grace has a 17-year-old sister, Millie, with Downs Syndrome. One of the reasons she hasn’t so far married is that she is adamant that she and Millie are a package deal, and that once Millie turns 18 and leaves school, she will come to live with Grace. Jack has no problem with that condition—he says he loves Millie and would never separate them. Jack buys Grace a beautiful house, furnishes it perfectly (including a bright and cheerful bedroom set aside for Millie in her favorite color, yellow), and tells Grace she will see the house when they return from their honeymoon in Thailand. They tie the knot and embark on their honeymoon…but from the first night of marriage, everything has changed. Jack reveals an agenda that has Grace both horrified and defiant, but no matter how badly she regrets throwing in her lot with Jack, Jack manages to anticipate her every move, and seemingly her every thought, and Grace is unable to maneuver her way out of this disastrous decision. 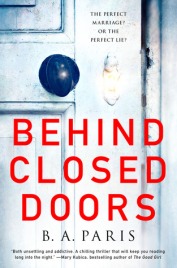 The brilliance of this book is the fact that you know almost everything up front, and the suspense lies not in discovery, but in action. What will happen next? What new psychological trauma will Jack visit on Grace? Will she be able to escape from her marriage (or even from her bedroom), can she protect her sister from Jack’s plans, and how will she effect any of this when Jack controls her life so completely? The answers ramp up the tension and horror from the beginning right to the last sentence.

I will freely confess that I read a good bit of this last night before I went to sleep, and had nightmares half the night. It’s a truly disturbing book, scarier in its way than any horror novel full of zombies or monsters. The emotional investment, the headlong pacing, and the nerve-wracking build-up to the finish filled me with both fear and fury. I loved it.