The books of Kate Morton are at once endlessly fascinating and absolutely maddening. Each of them is a lengthy 450 to 650 pages, and they are as chock full of detail as any leisurely reader in search of information on a plethora of subjects, or in relationships as entangled as the particles in quantum physics could desire.

Morton does write with a certain formulaic reliability: Each of her books contains some kind of perpetuating event that sends a person from the present day searching back into the past, whether it’s their own, that of a mother, aunt, or grandmother, or the history of someone who has at some point become significant in their lives. Most palpable in all her books is the sense of place—as focused as she is on character development and interaction, those characters operate from within a distinctive location—usually an old house, a garden, a bend in the river near a country town—and without that place, the lives and events about which the story turns would be greatly diminished.

Lastly, every one of her books contains a mystery, but not the sort easily solved with a little sleuthing on the part of a detective; not a straightforward murder, nor a conventional sort of crime. Instead, the mystery has multiple parts: a disappearance, a misunderstanding, a missing object, a mistaken identity, a masquerade. And it is up to the reader to bear with Ms. Morton and her characters as they painstakingly unravel all the elements to arrive at an eventual truth—but what a convoluted process that is! She weaves her characters’ lives together across generations, wars, marriages and divorces, sibling rivalries, and fated friendships, and it usually takes three-quarters of the book to bring each character together with the other person(s) in the story whose existence, actions, or contribution make him or her significant in the continuity of the tale.

The result of this form of story-telling is, as I noted, both fascinating and maddening. As you read and the story jumps from 1862 to 2017 to 1912 to 1962 and round about again, there are moments when you want to shout, Enough already! Extract all the bits about 1912 and tell them in a line, and then tell me what happened in 1944, and then in 1962, so I can see the progression and the logic and better encompass the story! But without the mystery of how all these people connect up across time, whether it is as relatives, lovers, or strangers who meet upon one single occasion, the reader would no doubt pay less attention to all the surrounding details, which are likewise sumptuous, atmospheric, sometimes educational, and always satisfying. And perversely, as you near the end of the book, there arises a strange reluctance to finish it; after all, you have just gotten to know all about these people, and now you have to let them go!

Kate Morton says her favorite part of writing a book is the research phase, when she is accumulating all the data that go into fleshing out the story in every direction. She has an obsession with houses, with objects, and with history, and likes nothing better than the opportunity to put them all together in an immersive relationship. And her background in speech and drama means she does it in a lyrical and literary voice.

I was particularly excited to read her latest offering, The Clockmaker’s Daughter, because I knew it involved an artist, a portrait painter whose style resembled that of the pre-Raphaelites, and his model and muse, a beautiful girl with long red hair named Birdie but known as Lily.

Although there are many parts to this mystery, the understanding of just who Birdie was, what happened to her, and where she ended up is at the soul of this book, as is the house around which much of the story revolves, a gabled house with eight chimneys on a bend of the Thames river in Lachlade. Birchwood Manor and its surroundings come to life in this book, to the point where you long to be able to pass through the small wood, cross the meadow, and arrive at the surprising view of its façade before entering and making yourself at home.

It’s really difficult to describe the events of this book, as elaborate and jumbled together as they are. I think the publisher got it right in depicting the central scene as the one in 1862 when Edward Radcliffe, several of his artist friends and their spouses or models, and Edward’s little sister, Lucy, all descend upon Edward’s newly purchased house on the upper Thames to spend an idyllic summer in a daze of creativity and picnics by the river. By the end of the summer, one person is dead, another has disappeared, and a family heirloom is missing, and these events prove tragic for more than one of the participants.

More than 150 years later, a young woman archivist discovers a forgotten satchel containing an artist’s sketchbook with drawings of a house that seems overwhelmingly familiar to her, although she knows she’s never been there, along with a photograph of an arrestingly beautiful woman. Her curiosity about these items sparks an inquiry that connects in odd ways to her own past, and stirs up the memories of all who were both directly and tangentially involved.

The book reads like historical fiction, like a ghost story, like a memoir, and tantalizes with the mystery central to it all. Although it took time and patience to work my way through it, and an occasional bout of paging backwards to reread a passage, a paragraph, or a chapter, the arc of the story was well worth the trouble. I only wish I could have read it while sitting in the library at Birchwood, nursing a hot toddy, in wintertime. 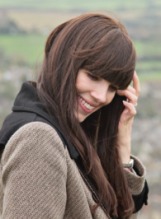 If I didn’t know better, I would believe that Kate Morton has found some incantation or charm, during all her researching, that has interrupted the aging process; she has both a degree and a masters, acted on the stage for a while before settling down to write, has a husband and three sons, and has written six books, with either two- or three-year intervals between the publication of each, and yet in her pictures and videos she looks like she’s about 30 years old. I’m hoping that the sole secret is that creative expression keeps one young!