A few years back, I read the book The Rosie Project, by Graeme Simsion. At the time, I didn’t have what you would call a significant reaction to the book; it was more along the lines of “charming, funny, and enjoyable relationship fiction.”

I did comment in my notes on Goodreads that the protagonist, Don, put me in mind of an adult version of Christopher Boone, the kid from The Curious Incident of the Dog in the Night-time by Mark Haddon—I could see him growing up to be Don: precise, literal, frustrating, yet engaging in his innocence and bewilderment about the social norms that escape him. 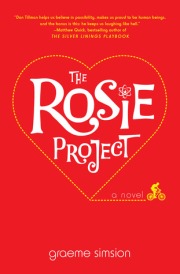 Don Tillman, Australian genetics professor, is an odd duck. His lifelong difficulties with social rituals and situations have caused him to create an orderly, easily navigated life with a precise routine and little human contact. He does have a few friends, and one of them comments to him that he has many attributes that would make him a good husband. This sets Don, who has never gone on a second date, to thinking about how best he could find a partner for himself with the least amount of fuss. His conclusion is The Wife Project, a questionnaire he devises that he intends to submit widely (mostly via a dating site) to weed out the things he can’t abide and narrow his search to the perfect woman for him: no smokers, no vegetarians, no late people, no messy people…the list of what he doesn’t want far exceeds the list of what he does!

Rosie Jarman shows up at his door intending to ask for his assistance on a genetics project, but because she has been sent by his friend and mentor, Gene, Don thinks she is there in response to The Wife Project questionnaire, and asks her out. He is baffled when he discovers that she is a smoker, a drinker, perpetually tardy, and in no way his ideal woman. But when he questions Gene about her, Gene (with some suppressed mirth) says he threw her in as a “control,” and encourages Don to continue to see her. Don takes up the challenge of Rosie’s genetics project, and begins to learn that perhaps the ideal woman on paper isn’t the one for him.

Although it is obvious to other characters in the book that Don is “on the spectrum,” as it has become modish to say about degrees of autism, Don has not self-diagnosed as such. When he is asked by Gene to substitute for him at giving a lecture and the lecture turns out to be on Asperger’s Syndrome to an audience of children with Asperger’s and their parents, Gene’s wife, Claudia, a psychologist and also Don’s friend, asks him if, in preparing his notes, anything seemed familiar. Don seems baffled by her question and doesn’t arrive at the answer she is obviously implying.

A few readers’ reactions to this novel have been negative, because they felt it mocked or made fun of autistic people, but the book’s author has noted that when he wrote it, he didn’t research Asperger’s, and in fact had based Don on “people I met in physics, information technology and doing a Ph.D.” He follows up by adding, “Experts in the field assure me that Don has Asperger’s and that community says the same thing. It was not my intention to make light of Asperger’s, and the Asperger’s community…regards Don as typical but not stereotypical. He’s seen as a good role model; readers generally love him, and that’s a good thing for the image of ASD.”

Remembering how I had enjoyed this somewhat light but entertaining and thoughtful read, I was pleased to see that while I wasn’t paying attention, Simsion had written two follow-up novels, continuing Don’s and Rosie’s story, and I snagged both sequels from the library’s e-book collection as soon as I could get them. 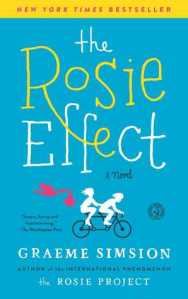 The Rosie Effect picks up fairly soon after the events of the first book; Don and Rosie are married (sorry, that’s a spoiler, but you kind of knew how it would end, right?) and living in New York City; they both have satisfying work, and everything seems to be going according to plan, which makes Don feel happy and secure. Then an unexpected pregnancy throws everyone for a loop. Don had always agreed, in the abstract, that he would enjoy having offspring, but as far as he knew, birth control was in place and nothing along those lines would happen without a lengthy discussion and negotiation. Rosie, observing their friend Sonia’s struggles to conceive, realizes she isn’t young any more in terms of optimum child-bearing years, believes it could take some time to become pregnant, and “decides” to forget to take her birth control pills, resulting in an almost immediate “success.”

Don does his best to cope with this news, but approaches it with his usual lack of emotion, choosing instead to make lists of tasks and goals that need to be accomplished before the baby is born and setting about them in typical Don fashion, which is to say he almost immediately finds himself in trouble on every front. Meanwhile Rosie, who was happy as Don’s wife, begins to question what kind of father he will be able to be for their child, and as Don seems increasingly incapable of understanding the emotional commitment she needs, Rosie withdraws. Don will have to rein in his various projects and focus instead on his relationship with his wife and child, or all his good intentions will be for nothing.

I had a little trouble with the evolution of Don’s and Rosie’s relationship as a result of the pregnancy. Don continued to be himself; but Rosie, confronted with parenthood, had an extreme reaction to everything about him that she had previously found charming (if maddening). Her reaction seemed over the top, even for someone whose instincts were telling her to place the welfare of her child over the viability of her marriage. For the first time in their interactions, you see Rosie have as little emotional understanding of Don as Don has of Rosie, and it’s unsettling. But it’s a strong story over all, and with the help of their friends they are both able to attain clarity. 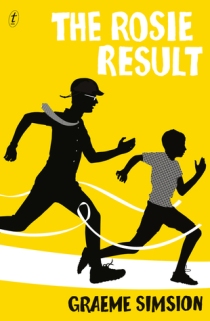 There is a considerable hiatus in years between the ending of the second book and the beginning of The Rosie Result; Don and Rosie’s son, Hudson, is now 11 years old. The family has returned to Melbourne, where both Rosie and Don are working full-time in their professions. It soon becomes clear, however, that one of them will need to suspend a busy schedule to give time and attention to their son, who is having trouble fitting in at school and needs more parenting. Coincidentally, Don does something that is typical (and without agenda) for him but which his students find offensive, and concludes that putting some distance between himself and this problem is congruent with his goal of tutoring Hudson in how to get by in a world that thinks you’re weird. Don quickly realizes that the best thing he can do for Hudson is to “outsource” some of this instruction to people with better social instincts than his, and the following year becomes a good example of a “village” raising a child.

In this third book, Simsion openly confronts the topic of autism; while its effects in Don’s life were duly noted in the first two, it is Hudson’s difficulties in school that bring the topic into focus, and Simsion uses the interactions of the Tillman/Jarman family with school administrators, teachers, and counselors, other parents and students, and their unusual group of friends to highlight various sides of the issue. He shows the prejudices that confront people who don’t fit in with perceived social norms, and specifically discusses the pitfalls that lie in allowing a child to be “diagnosed” with something that will follow them for the rest of their school career and beyond. Labeling and identity, both specifically with regard to autism but also in a wider sense, are prevalent themes, and the book directly questions people’s assumptions about autism.

There is a particularly effective scene in which Don and Rosie attend a panel discussion about autism, participated in by a mother who has taken every route—including intensive tutoring, medication, and behavior modification—to help her daughter conform to neurotypical norms, as well as an activist who maintains that autism is not a disease but an identity. Her example is that she doesn’t ‘have’ lesbianism, she is a lesbian; therefore, she doesn’t ‘have’ autism, she is autistic—it’s part of who she is, not something visited upon her that she needs to confront and conquer.

Far from turning the book into a polemic, I felt that this debate, fictionalized and exemplified by the relationships amongst the participants in the story, made it all the more compelling. It is particularly touching as Don, who is determined to make Hudson’s life better than his own by teaching him to cope with society’s expectations, comes to realize that perhaps his response isn’t the best one for Hudson, and that if Hudson can navigate his life by being himself, there may be more wiggle room in his experience than his father had assessed. While maintaining the gentle humor inherent in Don’s (and Hudson’s) misunderstandings of social norms that Simsion portrayed in the first two books, in this one the intensities of the relationships become truly heartfelt. The arc of this three-book story is completed with vastly more depth than one would expect from light, “relationship” fiction.