Past Tense is Jack Reacher book #23, by Lee Child. I read a bunch of the books in this series in long-running binges, and then got tired of them and went away for a while. But after reading a surfeit of quirky and thoughtful mainstream fiction and some angsty teen fantasy, this was the straightforward, somewhat creepy dose of suspense I needed in the moment. 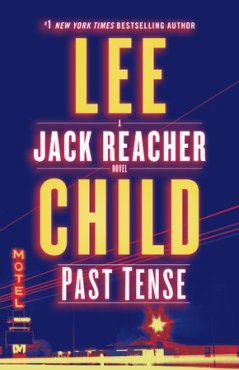 The Reacher books are, admittedly, pure formula, but when it’s a good formula (as with so many mystery or suspense series), it’s easy to go with it. Jack Reacher is former military police, but in a way he’s been ruined by his career. The typical nomadic existence of military life, constantly picking up sticks and moving to a new base, a new assignment, doesn’t lend itself to putting down any roots. People who retire from that either react by finding a home and never leaving it, or they remain perpetually restless. Reacher is an extreme example of the latter, roaming randomly and impulsively back and forth across the United States with no baggage but a toothbrush and no transportation but his thumb stuck out by the side of a highway. (If he gets work and makes some money, he occasionally takes a bus or train.) Because of a combination of his background training and his hardline personal ethics, no matter where his curiosity leads him, Reacher inevitably becomes embroiled in some local trouble and acts as a knight errant to help the innocent and punish the guilty.

If you’ve seen the two movies starring Tom Cruise, most faithful readers will tell you that you haven’t met Jack Reacher. There was major outrage when he was cast, since Jack is a rangy six foot five in his stocking feet, 220-250 pounds, with blond hair—scarcely a description of the tough and enigmatic but nonetheless short and dark Cruise. I always thought, if he’d been 30 years younger, that the recently deceased Rutger Hauer (the replicant from Blade Runner) would have been good casting. Ironically, when she first sold the film rights to Interview with the Vampire, Anne Rice had pictured Hauer as perfect for the role of the vampire Lestat, which role Cruise also bogarted, to his and everyone else’s eternal regret!

In this particular book, there are two parallel story lines that persist throughout and only come together near the end. Reacher’s part of the story is initially fairly benign; with autumn coming on, he is departing soon-to-be-chilly Maine with plans to take a zig-zag path that will eventually land him in California for the winter. He puts his thumb out and gets a ride that promises to take him a good ways on his first day, but then the driver’s business calls him back to town, and Reacher is stuck out in the middle of the New Hampshire woods. A road sign for Laconia, New Hampshire decides him on his next leg; he’s never been there, but recognizes the name from family stories as his father’s birthplace, and decides to explore for a day before continuing his journey.

Meanwhile, a young Canadian couple is traveling to New York City to sell something valuable and parlay that into a new life in Florida; but car trouble sends them limping down a long country lane in search of assistance. From the minute Shorty and Patty arrived at the out-of-the-way motel, their old Honda knocking and backfiring, and met the four co-owners, I knew something was up; the guys’ bouncy, friendly affect was too much like Mormon missionaries at the door to be for real. The elaborate web of lies they wove to keep Shorty and Patty from going anywhere kept amping up my nerves as I waited to see what was intended for these two, even as they rationalized and justified their way from uneasiness to optimism and back again. The whole story line was fraught with anticipation.

At first, I assumed Reacher’s part of the story was simply designed to put him in the neighborhood of the hotel when it came time for whatever terrible thing was going to happen there to require his services. But his accidental and fairly casual research into his father’s small-town origins revealed more and different facts than he expected, puts him up against a couple of tough customers, and leads to some trouble of its own.

Although some people thought both story lines were drawn out too much, I really liked the switching back and forth between them as a vehicle to build suspense. The situation with Shorty and Patty eventually blows up, and Reacher is instrumental in his familiar role as a fixer. Despite a few departures from Reacher’s usual modus operandi, I enjoyed this quite a bit—it kept me reading until my Kindle died at 1:30 a.m., and I recommenced at 7:30 after the Kindle (and I) had recharged! There’s something to be said for a recurring theme with individual characteristics enlivening each iteration!