Seduced by a pirate!

I can’t believe I almost missed “Talk Like A Pirate” Day! Arrrgh! But a friend clued me in and, as it happens, I have the perfect book to feature… 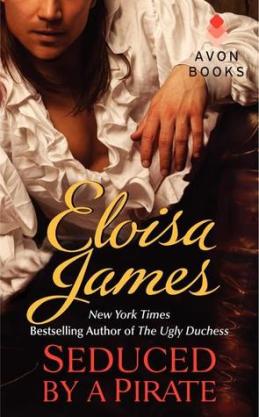 As part of the requirement for my romance readers advisory course
I took during August, I had to choose a book from among award-winners to read as my final assignment. I browsed the ALA best genre fiction lists, and my eye was caught by the word “pirate.” I’ve always loved pirate tales (romance or not), and an additional incentive (since I forgot that the assignment was due the very next day!) was that this was a novella of 100 pages, so I jumped onto Amazon and purchased Seduced by a Pirate, by Eloisa James, for my Kindle.

Griffin (Sir Griffin Barry) was wed to his bride, Phoebe, at the tender age of 17. Problem was, Phoebe was a beautiful and intimidating 20, and Griffin’s physical prowess didn’t live up to his titled consequence—he was a scrawny adolescent with no self confidence. So when it came to “doing the deed” on his wedding night, he cravenly jumped out the window and headed to the local pub with the objective of getting very drunk, rather than confronting his husbandly duties, which he doubted he could perform! The only problem with this scenario: As a highly intoxicated stripling, he presents the perfect temptation.  Press-gangers kidnap him and put him on a ship to the West Indies, and no one knows what has happened to him. Eventually Sir Griffin comes into his own as a pirate, er, privateer on board the Flying Poppy, his own ship, which he thinks he named after his wife (having misunderstood her Christian name at the wedding ceremony). Along the way, he encounters his cousin James, a duke who has similarly fled an unfortunate marriage, and the two of them team up to rule the seas and rid them of “real” pirates for a decade, until both are wounded in a battle. So they solicit and receive pardons from the Crown for their piratical ways, and decide to go home and see how the land lies.

But what happens when a pirate finally comes home to his wife—if she is, still, his wife—and discovers that a lot of unexpected events have taken place during his absence? Will there be a reunion and a consummation? or will the pirate head back out to sea, solitary and cheesed off?

I won’t say that romance will ever become my favorite genre (or even place in the top three), but if it were going to, books like this would definitely aid that progression. James writes with the same kind of esprit as my beloved Georgette Heyer (and this is a monumental statement for me to make!). Her characters, dress, manners, scene-setting, and plot are definitely “up to snuff,” pardon the old-fashioned but entirely appropriate saying. I found this novella to be an unalloyed delight, and the addition of “sizzle” to the basic romantic formula was just explicit enough while still remaining tasteful—and not clichéd, which is the thing most difficult to do in romance. 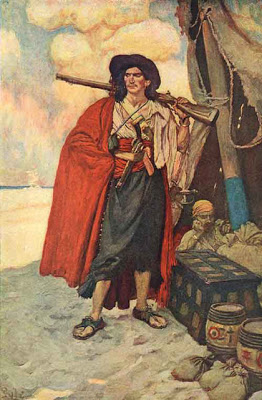 The only fault I had to find was the abbreviation of the cat-and-mouse aspect of this story. Griffin should have been a lot more disturbed by the changes he came home to find had been introduced by his wife; and Phoebe should have taken a little more time and exerted a little more willpower to resist his wiles. I mean, he didn’t even remember her name right! But, how much can you draw it out in just 100 pages? Probably the fault of the novella oeuvre. I will definitely read another (full-length) of James’s books to find out.