It was such an interesting experience for me to pick up the book Snobs, by Julian Fellowes. I have to confess that I am one of the few people on the planet who has never watched a single episode of Downton Abbey; a couple of weeks ago, however, I was scrolling around Amazon Prime looking to be entertained, and encountered a four-part miniseries based on a book by Anthony Trollope, from his Chronicles of Barsetshire series. “Julian Fellowes presents Doctor Thorne” popped up after I had watched a few other BBC productions, and although it is based on a Trollope book and set far earlier than the events of Fellowes’s book Snobs, there was an eerie similarity to the satirical tone set by Fellowes. 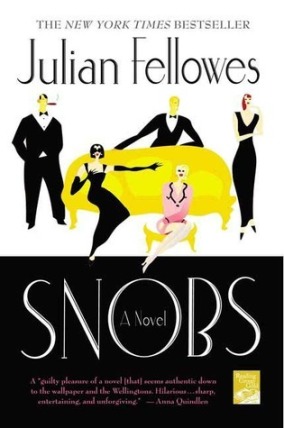 On the surface, this is a regular story about a woman who marries a man, regrets her choice, and looks around her for something else to alleviate the boredom. Edith Lavery, caught between eras, is the child of a socially ambitious middle class mother who hopes, through an advantageous marriage for Edith, to make it into the top echelon of British society. Edith, an attractive girl without any particular passions, life ambitions, or schooling, is drifting along, working in a low-paying clerical job and living in a frumpy apartment in the City. Despite being a young woman of 1980s and ’90s London, she wasn’t raised to believe she needed to be her own person or support herself indefinitely, and she cringes at the thought of a continued existence as a single woman of no means.

Then, a weekend stay in the country and a tourist’s visit to a “stately home” brings her to the attention of Charles, Earl Broughton, and suddenly she catches a whiff of what it would be like to step into the life of the future Marquess of Uckfield, with family estates in Sussex and Norfolk. To know all the “right” people and to be acknowledged by them, invited into their homes, accepted as one of them. Charles, while being a rather dull dog fixated on managing his estates and having his yearly shooting parties, is considered by society to be quite the eligible bachelor, and Edith carefully makes her play to ensnare this rather stodgy but not unappealing young aristocrat.

Four months later, having quickly exhausted all her inner resources (which were, admittedly, few) by playing Lady Bountiful to the surrounding tenants, running committees, and dutifully embracing the country life alongside her sharp-eyed mother-in-law, Lady Uckfield, and her kind but deeply stupid father-in-law, the Marquess, Edith’s eye is caught by a man completely different to her husband—handsome, flirtatious, sexually provocative, and flatteringly attentive—and she begins to consider whether she has made a disastrous mistake.

The thing is, though, this book is not entirely or even mostly about the surface story. Although the elements of a marriage made for all the wrong reasons are its ostensible reason for existing, the tale is a much more compelling one; the events of Edith’s and Charles’s lives are used as a primer for an explanation of the minute yet deadly intricacies of the upper echelons of English society. The narrator, an anomaly himself as an actor who has emerged from the aristocratic upper class and thus moves freely amongst multiple cliques, does a masterful job of seeing and explaining the nuances of each move made by the pertinent characters, from Edith and Charles to each of the true aristocrats and desperate social climbers involved in the story.

The one thing that irritated me about “Julian Fellowes presents Doctor Thorne” when I watched it was the bracketing remarks made by Fellowes, which, although they followed in the footsteps of Masterpiece Theater’s introductions by the eminent Alastair Cooke, came across as pedantic rather than creating a pleasant framework for each episode. Surprisingly, however, although the unnamed narrator of Snobs serves much the same function in breaking down and analyzing the manners and motives of all its characters, I didn’t have the same reaction to him, and in fact enjoyed and looked forward to his digressions.

This book had much the same effect, although longer and far more complex, as did Alan Bennett’s commentary on the Queen’s new addiction in his novella, The Uncommon Reader. Fellowes’s witty, sometimes acerbic take on social protocols among the British elite was spot-on. Anyone who has rank has status, and with status comes singular mannerisms, language and social morés far too subtle for the commoner to comprehend. But as someone who springs from the bosom of this class, Fellowes (and his narrator) are completely capable of subtle but devastating mockery alongside good-natured kindness and empathy, and their revelations intrigued me.

← Seduced by a pirate!
Cormoran recap →