Two of my favorite YA books of recent years were written by the same person. She’s not a well-known author, and not that many people have read her books compared to the overwhelming numbers who buy every book written by realistic fiction writers Sarah Dessen, John Green, or Rainbow Rowell. But if you haven’t read at least two of her books, you’re really missing out.

I just did a re-read of her first,
I’ll Be There. Previous to writing this realistic YA novel, Holly Goldberg Sloan was a screenwriter for family feature films, and some of that particular skill comes across in her first novel. It’s told in third person omniscient, so there isn’t nearly as much dialogue as you might expect, but you do find out a lot about the characters from the inside out, as you follow their thoughts about those with whom they are interacting. And these insights are a big part of the magic of this book.

Emily Bell is just a regular girl. Her mother is a nurse; her father is the choir director at their church; and she has an endearing little brother and a dog. Up until her 16th year, Emily’s life has followed a fairly conventional path. But as a result of taking one risk, she meets a boy unlike anyone she has ever known before, and this boy is going to change Emily’s destiny in a multitude of ways.

I know what you’re thinking: A meet-cute, followed by insta-love and some kind of semi-fake drama that throws them together or tears them apart or whatever. But this book, while written simply and clearly with largely knowable and understandable characters, is anything but typical.

Sam Border and his little brother, Riddle, have lived a life that is the polar opposite of Emily’s prosaic suburban existence. Their father, Clarence, a narcissistic grifter, stole them from their mother when Sam was in grade school and Riddle was little more than a toddler, and they haven’t had a home since. They travel wherever the luck takes Clarence, living in condemned houses and broken-down trailers, sometimes sleeping in Clarence’s truck. Sam never made it past second grade, and Riddle has never attended school.

When Emily and Sam meet and get together, each one is a conundrum to the other. Sam may see Emily more clearly than Emily sees Sam, because he knows the circumstances in which she was raised, while Emily has no clue about a life that doesn’t include a clock or a cell phone, in which people forage for leftovers from the trash at the fast food place and never know when they will be moving on. All Emily really knows about Sam is that he is different from anyone she has ever met, and she wants to know more. Their worlds are bridged by their attraction for one another.

Emily’s parents, concerned about their daughter’s fascination with this stranger, encourage her to bring Sam home to dinner, and when they begin to figure out what Sam’s life must be like, and then meet Riddle for the first time, their concern shifts to a desire to help. But the paranoid Clarence, who has trained his boys in how to remain invisibly under the radar, interprets this attention as a threat, and once again the boys are launched into the unknown, dragged at Clarence’s heels. This time, however, someone knows, someone cares, and someone is looking for them.

The book is filled with whimsy, pathos, humor, tragedy, and love. I have read it three times, and can imagine reading it again a few more. The book reminded me a bit of Trish Doller’s book Where the Stars Still Shine, because of the similar circumstances of a parent who lives his or her life with almost total disregard for the well-being of the children. 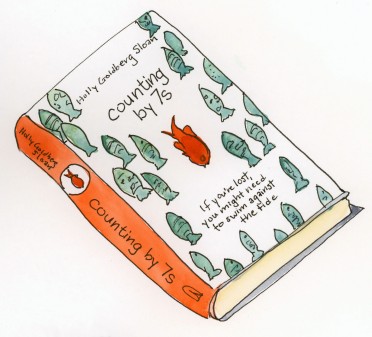 Sloan’s other notable book is called Counting by 7s, and was Amazon’s best novel of the year for middle grade when it came out in 2013. Although it, too, highlights a child who is different from everyone around her (the one fish swimming against the current), it could scarcely be more different a story than the romance between Emily and Sam.

Willow Chance is a 12-year-old genius, a quirky obsessive-compulsive whose life was saved when her parents adopted her as a small child. Although she doesn’t fit in well with her peers, her multitude of interests (medicine, gardening, languages) keep her happy, if solitary. (Think of Sheldon Cooper as a small mixed-race girl.) Tragedy strikes when both her parents are killed in an automobile accident and Willow has to confront the possibility of foster care while doing without the love of the only two people who ever made an effort to understand her. What she does to reconstruct her life and find a family will keep you riveted to the end.

The only similarity of this book to the first one is Sloan’s multi-character-driven storytelling, which makes Willow’s story particularly vivid. The writing is spare yet incredibly dense in detail, if that’s possible. Although this book received a lot of attention from a multitude of literary awards geared towards writing for young people, I have always argued with my librarian colleagues that while it is about a middle-school-age child, the story is more sophisticated than can be appreciated by children of that age. One Goodreads reviewer conceived of Willow as “an American Matilda,” that beloved heroine created by Roald Dahl, which I thought was particularly insightful; and another character of whom I am reminded is that of Flavia de Luce, the amateur chemist and sleuth from Alan Bradley’s mystery series that began with The Sweetness at the Bottom of the Pie. There, as here, while the protagonist is a young girl, the story is for adults.

Don’t miss out on these two stories. Whether you are a teen or a grown-up, they are well worth your reading time.