Call Down the Hawk

The mind of Maggie Stiefvater is a strange, labyrinthine forest of compelling characters, lyrical prose, and tantalizing half-formed truths not quite available to anyone but her. 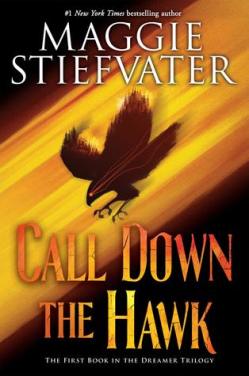 This much-anticipated book is the first of a new trilogy that nonetheless revisits some familiar characters. Starring in this series are the Lynch brothers—Declan, Ronan, and Matthew—previously seen in Stiefvater’s Raven Boys books, plus a new dreamer, Jordan Hennessy, and her creations, a host of doppelgangers pulled from her sleep-time. All of these actors—familiar and unfamiliar—are fascinating, fallible, and easy to like or at least to follow.

Less sympathetic because harder to fathom are the “Zed” (dreamer) hunters who are on a mission to kill due to some nebulous vision that a dreamer will end the world if not stopped. The only one of these we get to know in some measure is the enigmatic but sympathetic Carmen Farooq-Lane; the rest of her “crew” by uneasy association (Lock, Ramsay, etc.) are mere names and occasional paragraphs of words, all hired, paid, and spurred on by an unnamed organization about which we are fated to know nothing, at least in this volume. Equally puzzling are the Visionaries who are in on the kill by association, in that their visions lead the hunters to the dreamers.
But it’s hard to understand where they came from, what was their original purpose, and why they are cooperating in the death of people who are, let’s face it, more sympathetically aligned with them than are these killers.

You will get from this description that there are parts of this book that are clear, linear, and engaging, and other parts that are frustrating, tangential, and confusing.

I was happy to see Ronan in the driver’s seat. I was less happy with the few glimpses we get of his paramour, Adam, away at college, but there are implied promises that Adam will reappear down the road. I loved the revelations about Declan’s persistent efforts to present a false face to the world, because in The Raven Boys and sequels I found his stance unbelievable and knew there was something better underneath the smug, preppy exterior. The new character(s) Jordan Hennessy, with her skills and her plight, are interesting and endearing and make you hope for their salvation. The exterior details surrounding everyone—the art forgeries, the black market, the odd foreshadowy people who turn up here and there, the bizarre real estate—give an extra depth to the story. 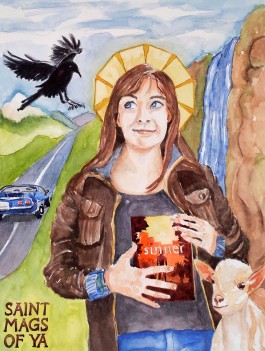 This is definitely not a stand-alone work, what with all of its many implications left hanging. Truths are almost but not quite revealed about so many puzzles left over from The Raven Boys books or opened up for speculation in this one—the origins of Niall and Aurora Lynch, the disembodied voice of Bryde hocking Rowan from his dreams, the as-yet-unknown Dreamer X who is responsible for the hypothetical apocalypse…. This book is made of dreams and, like the dreaming mind, it all seems to make perfect sense until you wake up and realize you have a lot of questions! Can you please write a little faster, Saint Mags?