For those of you who are emphatically not schmaltzy and sentimental at Christmas, let us move past the classic Christmas stories to something a bit more tart than sweet.

You may not want to read these around the fire, for fear of offending the more traditional of your number…but then again, you may! There’s everything from the paranormal to the extraterrestrial, also featuring talking pigs, superior valets, and murder most festive. 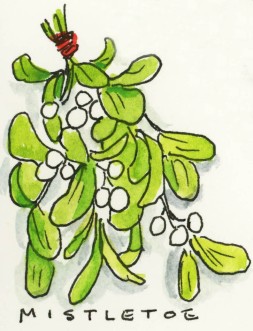 Wolfsbane and Mistletoe,
edited by Charlaine Harris and Toni L. P. Keiner
The promotional copy says it all: “Whether wolfing down a holiday feast (use your imagination) or craving some hair of the dog on New Year’s morning, the werewolves in these frighteningly original stories will surprise, delight, amuse, and scare the pants off readers who love a little wolfsbane with their mistletoe.”

The Christmas Pig: A Fable, by Kinky Friedman
A king decides to hire an artist to paint a nativity scene for Christmas. His assistant suggests a 10-year-old autistic boy, Benjamin, who is a talented painter, and Benjamin retreats to a barn to begin painting the king’s commission. There, he befriends Valerie, a talking pig who brings Benjamin out of his shell. Ben wants to paint his new best friend into the scene, but pigs don’t appear in the biblical story. The description of the book ends with some fateful words: “The ending is the saddest thing since Old Yeller.” I’m kind of afraid to read it. You do it and tell me about it.

A Lot Like Christmas, by Connie Willis
If you know Connie Willis, the Hugo and Nebula award-winning science fiction author, you will realize that although this is a book of Christmas stories, they will be the opposite of “twee,” and will put a speculative spin on the holiday.

The rest of these offerings are also to be chalked up to Connie, who, at the end of her first collection of Christmas stories (Miracle), offered a list of a dozen more that she herself appreciates. I have a feeling that many of us will, too. I only included the ones for which I could find a source, since some are both ancient and obscure!

The Best Christmas Pageant Ever, by Barbara Robinson
The Herdman kids are the worst—they lie, steal swear, smoke, you name it. Who would have thought they would decide to come to church one Sunday to take over the production of the annual Christmas pageant? None of the Herdmans has ever even heard the Christmas story before! It will definitely be the most unusual pageant in history… (This is a children’s book, still readily obtainable.)

“The Santa Claus Compromise” appears in a short story collection called The Man Who Had No Idea, by Thomas M. Disch. The extension of full civil liberties to children leads to some stunning “revelations” about Jolly Old St. Nick as two intrepid six-year-old reporters expose a shocking scandal. (You can find this book used online from Alibris, AbeBooks, and other used book vendors.)

“The Tree That Didn’t Get Trimmed,” by Christopher Morley.
Only read this story if you want a heaping cup of depression substituted for your eggnog! Written in the spirit of “The Little Match Girl” by Hans Christian Andersen, this is told from the viewpoint of a sapling who was cut too soon, thus not achieving that perfection of tapered shape and even foliage desired by everyone looking for a Christmas tree. And so he leans, day after day, against the wall of the green-grocer’s shop, unchosen, and thinks back to how wonderful it was when he lived in the forest and his roots reached down into the earth. It reminded me of the Friends episode when Phoebe goes to the Christmas tree lot with Joey and discovers the purpose of the chipper. Don’t worry, though—the story is nearly impossible to locate!

“Rumpole and the Spirit of Christmas,” by John Mortimer.
Horace Rumpole (quoter of Wordsworth and Shakespeare, smoker of smelly cigars, defender of the innocent, solver of mysteries) isn’t particularly fond of Christmas Day—he finds it has a horrible habit of dragging on as She Who Must Be Obeyed leads him through the usual rituals. But at least the criminal fraternity rarely takes a holiday. (Found in Regina v. Rumpole. There are five more stories to go with it in a separate volume called A Rumpole Christmas: Stories.)

“Jeeves and the Yuletide Spirit,” by P. G. Wodehouse.
Please tell me you are familiar with the amiable but dimwitted man-about-town Bertie Wooster and his inimitable valet, Jeeves? (From the short story collection, Very Good, Jeeves.) Also check out “Another Christmas Carol,” in Wodehouse’s The World of Mr. Mulliner.

And finally, a discovery I made while searching for Willis’s favorites:

How Fear Departed the Long Gallery:
A Ghost Story for Christmas,
by E. F. Benson
I would go to great lengths to find a Christmas story conceived of by the brilliantly catty creator of Queen Lucia and Miss Mapp. Turns out all I had to do was spend 99 cents on a Kindle version. This book is part of an extensive series of Christmas ghost stories illustrated by Seth (Canadian artist Greg Gallant), by such famous names as Edith Wharton, Algernon Blackwood, Frank Cowper, Walter de la Mare, and more. They are all now available on Kindle. Search “Christmas ghost stories by Seth” on Amazon for a list.

One more Christmas list still to come, for those who want something novel-length…