Tying in with the witchy theme from my last post are a new set of mysteries that I decided to try. The first three books came up as a set for free for my Kindle (usually not a good sign), but I enjoyed the first enough to read the next two in the series.

Family Secrets, by Shawn McGuire (not to be confused with Seanan), is the first in the Whispering Pines Mysteries. Jayne O’Shea has come to Whispering Pines in the wake of her grandmother’s death to box up or sell the contents of her house and then sell the house itself. Her father is the heir, but he wants nothing to do with the property, the town, or the inherent memories.

Jayne herself hasn’t been there since a family feud 16 years ago when she was 10 meant the end of summers spent at the lakeside cabin in Wisconsin with her grandmother. But taking care of this task is just what Jayne needs—she has recently left her job as a homicide detective after a traumatic event on the job made it clear she needed a change, not to mention that she just broke up with her long-time boyfriend and has no home. What she isn’t expecting is the fascination that the town of Whispering Pines almost immediately exerts over her.

It’s partly the fact that it’s a town for “outsiders,” those who don’t fit comfortably anywhere else—Wiccans, circus folk, psychics, the differently abled, all found a home here on Jayne’s family’s land, granted a place by the “Originals” (first settlers), and created a place like no other. But the primary initial hold it has on her is the murder she discovers on her first morning in her grandmother’s house (the body is on her property), and the fact that the local sheriff and his dysfunctional deputy appear to be not at all concerned with investigating it. Jayne just can’t help herself—and willy nilly, she immediately becomes embroiled in both the lure and the secrets of Whispering Pines.

I liked the main character and her new sidekick / potential love interest in this first book. I also liked the setting of the remote, exceedingly picturesque village that welcomes only those who don’t fit in elsewhere. And if McGuire temptingly describes any more of the food they are selling and eating in the village shops, I may have to break quarantine to go to the nearest bakery or ice cream place! 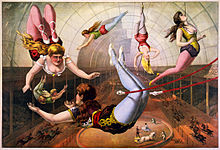 I did have some issues with the way the first mystery was structured—solved, yet not solved, with kind of an abrupt ending that was obviously designed to get you to go on to the next book. But since I am a sucker for not knowing what happened, I kept going. I’m halfway through the third book now, but I’m not sure how much longer I will keep reading, because I am also a stickler for grammar, and McGuire (and her obviously sloppy editor) keeps getting the “and I” vs. “and me” wrong. It grates on every nerve. Still, the author has nicely dragged out the potential romantic interest over the course of three books, keeping both the protagonist and the reader interested without getting frustrated, and the setting and decidedly quirky characters are a lot of fun, especially compared to some of the dourly “normal” folk in your average mystery. So I may overlook a few grammatical errors for the sake of story. (But I may also write a letter to the publisher.)