I’m at the end of Week Six of self-quarantine, and feeling restless. That’s not to say that I agree with any of these initiatives to hurry to open things back up—we stay inside to lower the curve, to protect others and ourselves, and it isn’t time yet. But I can acknowledge my feelings and those of others who are going a little stir-crazy.

So, what could be better to read in a time of restriction than something completely escapist? And what could be a more familiar escape trope than running away to join the circus? It’s a notion secretly cherished by people young and old. Running away is one thing, but in this fantasy, destination is all.

I have a few favorites in the run-away-to-the-circus panoply of titles. First on my list is A Stranger at Wildings, originally titled Kirkby’s Changeling, by Madeleine Brent (otherwise known as Peter O’Donnell). At age 13, Chantal discovers the devastating truth about her parentage, and is about to be sent to an orphanage; instead, she decides to disappear into the world of the circus that has just paused in her English town on its way to Hungary. We follow Chantal’s career as a trapeze artist until she turns 18, at which point events conspire to change her life and send her back to England. But she’s not sure she wants this change, especially if it means leaving her circus family. It’s pure gothic magic in the style of Mary Stewart.

The book Meridon, by popular historical fiction writer Philippa Gregory, is one of my personal favorites, because the protagonist is both a gypsy and a bareback rider, so you get lots of horsey bits. But the book is the third in the Wideacre trilogy, and you really do need to have read the first two in order to understand particularly the second half of this book. All three books are engaging (although a bit scandalous here and there), so if you have the time…and you do…? The first two are Wideacre and The Favored Child (neither of which has any circus motif).

The following would most likely be found in the young adult section:

Wonder When You’ll Miss Me, by Amanda Davis, is a coming-of-age book, a triumph over adversity book, a story in which a seriously damaged and divided girl gets the chance to work through it all and pull herself together, with a backdrop of circus life that jumps off the page. The writing is beautiful, the characters are real and individual, and the story-telling is captivating. I wish the publisher had designed a cover to match. 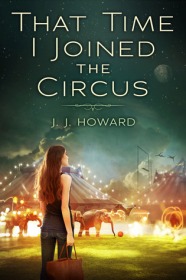 That Time I Joined the Circus, by J. J. Howard, tells of Lexi, a snarky New York City girl, who makes a huge mistake and faces a terrible tragedy. In the face of this, she decides she must track down her mother, who is rumored to be traveling with a circus somewhere in Florida. Lexi doesn’t find her mother there, but she does find a temporary home with the circus. In this story, what the protagonist is running from is equally as important as what she is running to, and she
has to resolve these issues, which are dealt with in jumps from past
to present.

Even in the circus sub-genre, there are books with “girl” in the title!
Girl on a Wire, by Gwenda Bond, is a little different, in that most of these stories start with someone running away to the circus, but Julieta Maroni is already a circus performer who is fleeing her family to convince her father, the best wire walker in the world, to join the giant Cirque American despite his feud with their other stars, the Flying Garcias. It’s a rather obvious Romeo-and-Juliet set-up, but it’s also a mystery, a fantasy, and a great depiction of performances on the high wire and trapezes. It has a sequel,
Girl in the Shadows, with a different protagonist but taking place at the same circus.

Some more adult books in this sub-genre:

One title to which your mind will probably immediately go is The Night Circus, by Erin Morganstern, in which the circus is the magical, seductive background for both a battle of wills and a deeply romantic love story. 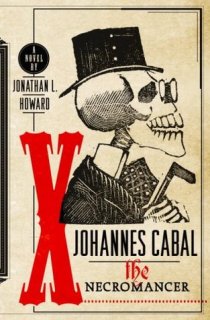 Another is Johannes Cabal the Necromancer, by Jonathan L. Howard, a funny gothic tale about a man who sold his soul to the devil, but decides he wants it back. Satan agrees to a wager: Johannes has to persuade 100 other people to sign over their souls in exchange for his own. He can have one calendar year and a traveling carnival as the timeframe and setting to achieve his task. Johannes summons an unearthly crew and takes his show on the road. 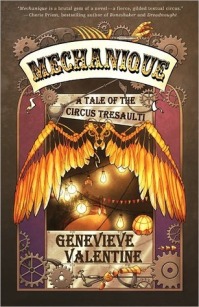 Mechanique: A Tale of the Circus Tresaulti, by Genevieve Valentine portrays a post-apocalyptic future in which a band of lost souls travels from one ruined city to the next, bringing their marvels to eager crowds of war-ravaged humans. It’s been described as steampunk, as a prose poem, and as a disjointed tapestry of image and text that will only appeal to a few—but those few rave about it. 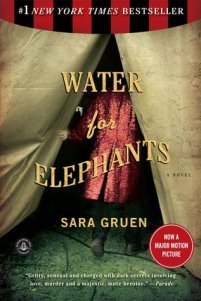 In Water for Elephants, by Sara Gruen, Jacob Janowski, 23 years old and only days away from his final exams to become a veterinarian, is devastated (and stricken by poverty) when his parents are killed in an auto accident. He hops a freight train that happens to be transporting a circus, and soon becomes an integral part, caring for the animals while yearning after a married woman and a difficult elephant. The story is told in flashback, from the viewpoint of an elderly nursing home resident reflecting on his past. (There is also a movie, though I haven’t seen it.) 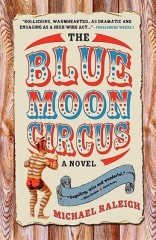 The Blue Moon Circus, by Michael Raleigh, is the highly rated story of ringmaster Lewis Tully, who gathers together an eclectic group of people to form an independent traveling show. It’s sweet and funny, with likeable characters both human and animal, and a lot of heart. 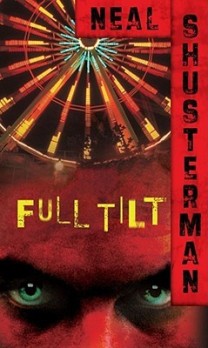 There are also those stories of circuses that occupy the dark end of the spectrum, the evil circus or carnival from which you wish to escape, such as the classic Something Wicked This Way Comes, by Ray Bradbury, Full Tilt, by Neal Shusterman, or The Carnivorous Carnival, by Lemony Snicket. (To this day, hearing the eerie carousel music soundtrack to the movie version of Something Wicked can really mess with my mood.)

Goodreads has quite a comprehensive list of “circus and carnival books” you might want to visit, if one of these books whets your appetite for more “escapist fiction”! One I have always wanted to try is Nights at the Circus, by Angela Carter.