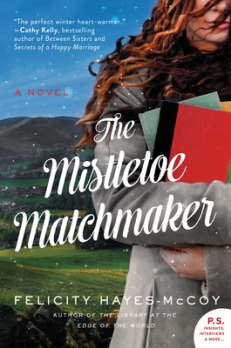 The Mistletoe Matchmaker, by Felicity Hayes-McCoy, popped up on my e-book shelf from Los Angeles Public Library this week, and since I had already read the first two in her trilogy about the Finfarran, Ireland peninsula, I slotted it in between my book club read of Searching for Sylvie Lee, by Jean Kwok (which I finished some time ago but can’t report on until after the book club discusses it on June 2), and my next planned read of Ninth House, by Leigh Bardugo.

I read it to round out the trilogy, but honestly, I needn’t have bothered. The main character, who is the granddaughter of the best friend of Hanna’s mother, Mary, from book #1, and is visiting from Canada, was introduced but not particularly well developed. The relationships in the book were awkward and in many cases the author failed to follow through, giving the story an uneven quality and leaving the reader wondering who was important and who was not. There were several “red herring” set-ups that were complete let-downs when you found out the real stories.

It almost felt like Hayes-McCoy had the seed of an idea and then, instead of really developing it, she took all the leftover, left-out scenes from the previous two books and strung them together to make a third. (In fact, there was one scene that was repeated almost verbatim, like she forgot she had already used it in book #2! Bad writing, and BAD editing.) The cumulative result was the discovery of some additional fun facts about certain favorite characters (Fury and the Divil), but no real continuity or resolution. Yawn.

Also, authors be advised: The word “matchmaker,” when it appears in the title of your book, sets up certain expectations that were NOT fulfilled here.

My conclusion: There is a difference between writing light fare and leaning too hard on a location and some nostalgia to carry a book. My suggestion: Enjoy the first two books of this trilogy and stop there.