One thing you have to do as a reader, if you are not to be eternally disgruntled with life, is to try not to have outsize expectations of authors. That’s tough sometimes, particularly if an author has never disappointed you with a single one of her books until the one you are reading right now, which you cannot believe came from the same person’s formerly fertile brain. Sometimes it’s not a matter of your icon having written a bad book, simply that she has written one that doesn’t resonate with you, or is directed to a different age group than you expected, or was written earlier in her career before she developed the amazing story-telling abilities that hooked you later on.

There are several authors I have run across who have surprised me in this way: One of them is Elizabeth George, whose masterful mysteries featuring the unlikely detective team of Thomas Lynley, son of the peerage, and Barbara Havers, woman of the people, cause me much excitement whenever they emerge. When I found out she was also trying her hand at young adult books, I was excited to see what she would produce, particularly because, as a teen librarian, I was always looking for a gifted “new” author to pitch to my YA book clubs. I read the first one the minute it hit the library shelf, and was both amazed and dismayed; where was the intricate plotting of her adult mysteries? This pseudo-paranormal mish-mash couldn’t be a product of the same sharp, incisive wit! I’m told that they did improve as she wrote more of them, but I never found out, I stopped at number one. I am still a dedicated fan of Lynley/Havers, and steadfastly ignore the rest.

Another author where the contrast isn’t so wide but nonetheless exists is V. E. (Victoria) Schwab. Her book Vicious is among my top 10 favorite books of all time, and I tout her Shades of Magic series to all and sundry, from 12-year-olds to the elderly. But her two series for young adults—The Archived and Monsters of Verity—left me feeling not exactly disappointed but certainly underwhelmed. I did enjoy the first of her Cassidy Blake books (City of Ghosts) for slightly younger readers, and I am looking forward to reading her new, long-awaited The Invisible Life of Addie LaRue, which Schwab has spent 10 years bringing forth and of which she says, “I’ve put my heart and soul, my teeth and blood and bones into this one.” I’m really hoping that it falls into the “I want a copy so I can reread it multiple times” category and not into the “I’m wishing I had read something else this weekend” pile. 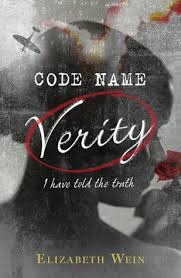 Anyway…that’s a long preface to say that I have experienced something similar this week with the book I chose. A few years back I read Code Name Verity, by Elizabeth Wein, an historical fiction novel of World War II, set in Nazi-occupied France, with an American and a British protagonist, both women, one a pilot and the other a spy. To say the book captured my imagination as thoroughly as one of its protagonists is held hostage by the Germans is an understatement. I read it straight through in one sitting, and wept profusely several times, the first occasion on which a book has caused tears since I was a teenager. The story, and the specific way it was recounted, simply bowled me over, and I actually couldn’t read anything else for a couple of days while I thought about and recovered from the book.

I remember, when I read it, thinking, “I do not understand why this has been marketed and sold as a YA book. Will some teens love this book? Definitely. Is it a teen book? Not in the least.” I followed up by telling blog readers, “I find myself sad that [CNV] has been marginalized in any way from finding its full audience, because this book deserves to be widely read. Adults out there, recommend this to your teens, and then read it yourselves, and give it to your mother and your friends and to strangers on the bus.”

As you can imagine, this set up high expectations for all the rest of Wein’s oeuvre, and when I saw one of them for a discounted price from bookoutlet.com, I snapped it up and prepared to be wowed. 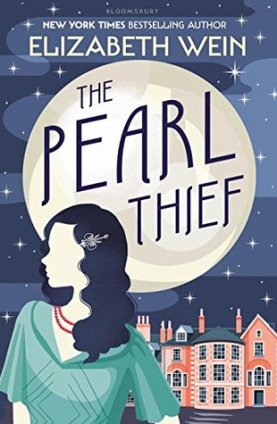 The book is The Pearl Thief, and it is as different as night and day or, to be specifically British about it, as chalk and cheese, to her previous work, even though its protagonist is one of the women from CNV, at age 15. And it is definitely written for a younger teenage audience. Before you expect me to pan it, let me say that it was a completely enjoyable read. But I was unconsciously expecting a level of drama and pathos, based on Code Name Verity, that simply didn’t manifest in this story.

If I hadn’t had specific expectations of this author, I still think I would have been intrigued by the book and its subject matter. It takes place in Scotland in 1938, and drops in at the end of an era for one family whose “perfect little Scottish estate, with a ruined castle and a baronial manor, nestled in woodland just where the River Fearn meets the River Tay” will no longer belong to the family, now that the death of Julia Beaufort-Stuart’s grandfather has triggered a reckoning. Lord Streathfern did all he could to save the house and the land for his heirs, but the combination of a lingering illness and a downturn in the economy made it necessary to sell up to a boys’ school, and the family are now inhabiting a small section of the house while the school administrators oversee the renovations and conversions necessary to turn it into the institution it will become. This will be Julie’s last summer on her grandfather’s land, with her brothers, her mother and grandmother, and the few servants left, and then they will move back to their own Craig Castle near Aberdeen, taking her widowed grandmother with them.

By broad contrast with Julie’s sheltered and privileged upbringing, the other vital characters in this story are the two teenagers, Ellen and Euan, in a family of Travelers who have spent seasons on Streathfern land time out of mind, helping harvest “tatties,” beating the bushes and collecting the downed birds during shooting holidays and, in between, collecting tin from the townsfolk and weaving baskets from the withies in the marshy land near the river. This land was ceded to them by right for the past 300 years in exchange for a small fortune in river pearls (which play a vital role in the story), but now the changing fortunes of the laird will mean change for them all.

As the story begins, Julie has just arrived home for the summer three days before she is expected. When no one is around up at the house, she changes out of her traveling outfit into a T-shirt and an old kilt and goes out hiking around the estate, reacquainting herself with her favorite haunts. One moment she is lying on the bank of the river with one arm immersed, tickling for trout in the deep, cold water, and the next she is awaking in a hospital ward with a splitting headache from a lump on her head, being treated with disrespect and disdain as the “tinker” girl they believe her to be. She discovers that she was found, unconscious, on a path in the woods, and brought into the hospital by two of the Travelers; once her mistaken identity is resolved, her mother is called, and she returns home, feeling battered and wondering about how it all happened.

It soon becomes clear that the thump on her head was no accident, and that it is probably directly related to a missing employee of the estate, who disappeared on the same day she landed in the hospital. Along with the two travelers, Euan and Ellen, she seeks out the reason why anyone would have sought to hurt her or the missing man and, in the process, must stand up for her Traveller friends as local bias against them starts framing Euan up for murder.

This book is a delightful combination of murder mystery, coming of age story, and a serious depiction of prejudice, as exhibited by many of the “regular” people towards the Travelers they hold in suspicion and distrust for their alternate lifestyle. Although it wasn’t quite what I expected in terms of drama and emotional engagement, it surprised me (in a good way) with its exposition of the themes Wein did choose to explore. I think adults could enjoy the book, but it is definitely written with teens in mind, and is one of those books one could recommend that promotes empathy to its young readers. The book would be appropriate for anyone 12 and up, although probably a lower age of 14 would find it more relateable.

This review is also to say, placing expectations on your favorite authors and holding them to some rigid ideal may make you miss out on books they wrote that are different but nonetheless effective and providing of considerable enjoyment.