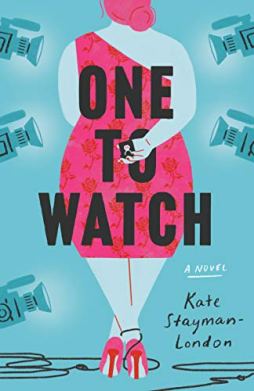 Sometimes themes develop accidentally, as you pick up a book here, a book there, and then view all of them at once, deciding what to read next. This particular theme was “fat women,” with one chick-lit debut and one YA by an author already known for heroines with size diversity.

Reviewing One to Watch, by Kate Stayman-London, forces me to confess a deep and shameful secret: I have been known to tune in to an episode or two of The Bachelor or The Bachelorette. Let me hasten to say that I am not one of what the host calls “Bachelor Nation” (ahem pretentious much?)—in fact, it’s been more hate-watching than anything—but I have, over the many surprising seasons it has continued its hackneyed formulaic road to romance, checked it out. The primary motivation for this is a complex cocktail of wanting to see the pretty people and the exotic locales, to mock the uniformly sincere expressions of all the participants who think they might have feelings for someone with whom they have spent six hours, and to marvel at the idiocy or bewilderment of the families who condone this behavior by one of their own. The primary result has been to irritate my cat, who doesn’t like it when I talk back to the television set, particularly when it’s in a scathing tone; but somehow I am as unable to resist seeing what’s going on just once a season as I am prone to wonder who will win Dancing with the Stars.

For that reason, the idea that the show would cast a bachelorette who was of a body type not seen on television unless the actress is playing a grandmother or a police chief intrigued me. A bachelorette who wasn’t a size 4? One who might actually sit down at one of those candlelit tables and eat the delectable dishes laid out in front of her, rather than spend the whole meal sipping her wine and whining about her feelings? Bring it on.

The whole concept that a normal woman—that is to say, someone closer to the American average of size 16—could be celebrated as desirable to 25 bachelors seeking matrimony is enticing, though problematic. After all, regardless of the inclusion of body positivity, the show is still set up to see romance as a cattle-call competition, with the women as prizes.

I am somewhat embarrassed to say, therefore, that I thoroughly enjoyed this book and would recommend it to someone looking for a story with a protagonist to whom they can relate: Someone who has transformed themselves on the outside but is still vulnerable and afraid beneath the surface; someone who decides she is brave enough to take a chance but who then constantly second-guesses herself based on everything that has been pounded into her by society, her family, other women, the men who have failed to requite her love, and the relentless trolls on the internet.

Bea Schumacher is a confident and stylish 30-year-old plus-size fashion blogger. She has good friends, a loving family, thousands of Instagram followers, but no romance. Her secret crush has strung her along for years, and has recently caused her to swear off men for the foreseeable future. But after she writes a blistering blog post about the show Main Squeeze  (The Bachelor, thinly veiled) with its lack of body diversity or, for that matter, any kind of diversity in its legions of skinny white people going on fantasy dates, the show calls her and asks if she will be the next star. Bea agrees, but she tells the show’s new producer, Lauren, that on no account will she actually fall in love. She’s going on the show to make a point about anti-fat beauty standards, and maybe to boost her list of followers into seven figures.

Of course things will get more complicated. Of course she will be upset, confused, intrigued, tempted, repulsed, angered, and beguiled as she spends 10 weeks supposedly looking for love. But she can’t possibly let go of all her preconceived notions and believe in the HEA, can she?

The thing I liked about this book was that it turned the reality show on its ear. Yes, there were meet-cute moments and embarrassing tests and awkward interludes just like on the real-life show, but in between that, because Bea isn’t the usual fare, the bachelors (who are mostly the usual fare, either muscular and dumbly sincere or sharp, handsome, and deeply cynical), get jolted out of their complacency as she attempts to have conversations with them that don’t revolve around the typical inanities. Bea is portrayed as a real person, and she reaches out to find the real person in each of the men she ends up with after the “extras” have been kissed off. (I loved that instead of “will you accept this rose,” the woman here gives them a lipstick kiss or “kisses them off,” depending.) As on the show, you really have trouble trusting that the men are telling the truth about themselves, their feelings, and their motivations, which is compounded in the case of Bea.

I thought the author nailed the struggles of being a plus-sized woman, wavering from confident to terrified as she is confronted by the cruelty of society towards women who don’t conform to insane standards of beauty. (She also had some fun pointing out how a blind eye is turned to men in that same category.) She didn’t fall for the temptation to make her protagonist lose weight in order to find her HEA, she forced the show, the men, and the viewing public to accept Bea as she was.

The depiction of the reality TV world—the way things are manipulated to make ratings, the descriptions of the fancy wardrobe, the tensions of the timetable—were well done, as was the use of the social media inserts into the story—text messages, emails, TMZ articles, tweets, and blog posts all added dimension to the story.

Ultimately, the book does pander to wish fulfillment, but then, what did you expect? It’s a rom-com. But it’s entertainingly written and told, and does have a lot to offer about false standards of beauty and their equation with worth. So I say, a positive review.

By contrast, I became almost immediately impatient with both the author and the protagonist of Julie Murphy’s new book, Faith Taking Flight. I should have known better than to broach this book with no expectations, because I found her previous book, Dumplin’, to be full of contradictions that didn’t lend themselves to her avowed goal of advocating for plus-size teens. But the prospect of a fat girl who could fly grabbed my attention, and I jumped in with enthusiasm. 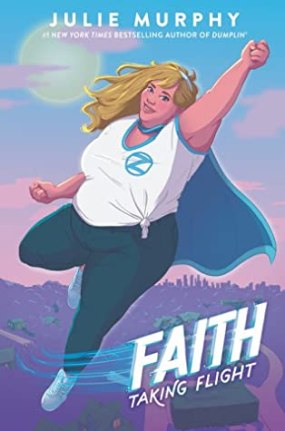 My enthusiasm quickly turned to dismay and derision as I experienced the thin plot development regarding the flying skills. Faith meets Peter, who tells her she’s been chosen to go through some kind of conversion to turn her into a superhero, because she has the potential to become a psiot. This conversation takes place at the mall. Then he tells her (alarm bells should be ringing) that she has to perpetrate a “cover” for herself over the summer—to tell her grandmother that she’s off to journalism camp. She agrees! She climbs trustingly onto a bus, goes to a secret underground facility, is locked in a room and assigned a uniform and a number, and then realizes she’s an experimental subject. Meanwhile, her granny (her guardian) sends mail and makes phone calls for the entire six weeks that she’s gone; Grandma Lou receives not one response, and doesn’t see this as a problem or institute any kind of inquiry, just assumes her granddaughter is fine? Come on. We discover later (way too late in the book) that Faith actually escapes from the facility with Peter’s help, whereupon she simply goes home and does nothing—doesn’t call the authorities, or wonder about all the other kids who were trapped there with her—she just gets a part-time job at an animal shelter, and resumes school in the fall. But this is the most unbelievable part of the entire story: She doesn’t fly! She has this ability, which would excite most of us beyond belief, and she doesn’t go out every night to try it out? doesn’t practice? doesn’t test her limits or tell her friends? No. She pulls it out when necessary (to save someone from falling off a roof, or to look for her grandmother when she wanders off, a victim of senile dementia) and that’s it. Right.

Meanwhile, we have the secondary plot, which is actually the primary one considering how much space it fills in the 338 pages of the book: The cast and crew of the teen soap opera (The Grove) with which Faith has been obsessed since childhood—to the point where she writes the premiere blog about it and publishes weekly recaps and commentary—moves its filming destination to her town, and the star of the show, Dakota Ash, supposedly meets cute with her over adopting a dog from the shelter, but then confesses that she has read the blog and knows who Faith is. Faith is over the moon (but still not literally, because not flying), and we get a lot of detail on this relationship, hurt feelings from abandoned “regular” friends as she tours the lot and has milk shakes with the star, yadda yadda. Oh, and this is the point where Faith explores the idea that she might be gay…or bi? After all, in addition to the tempting Dakota there’s also her journalism swain, Johnny….

Enter third plot: Animals (both strays and pets), homeless people, and random teenage girls have disappeared from town and no one can find them. One dog and one girl reappear, but are catatonic and provide no clues to the mystery.

So how does all of this fit together? Badly. Improbably. Unconvincingly. Incompletely. Because…there may be a sequel in the works. Yeah. Which would actually be good if it clears up any of the picked up and dropped plot points, the fuzzy background and world-building, and Faith’s inexplicable reluctance to use her friggin’ superpower! But based on this one, I highly doubt it. I discovered on Goodreads that this is a prequel novelization of a superhero from Valiant Entertainment comics. If I were the author of those comics, I would not be happy at this moment.

Before I forget, allow me to address the fat girls in the room: Murphy punts in this book as she does in Dumplin’. She gives the heroine the possibility of a romance or two in which Faith speculates, “But what could they see in ME?” and she almost lets her have it, but then pulls back to deliver the same blow fat girls always endure, when they are told that they are not special and that no one would want them. Yeah, maybe that message served the plot at that particular moment, but aren’t we all tired of the incessant battering of that already bruised spot on the fragile fat-girl ego? I know I am.

I finished the book, but I confess that it was only so I could better skewer it. Faith herself is an ebullient and somewhat refreshing protagonist, but she’s so weighed down by a thin, chaotic and nonsensical story line that she’ll never, ever get off the ground.