I recently caught up with the Bill Slider mysteries by Cynthia Harrod-Eagles; I had inadvertently read numbers 20 and 21 in the series without having read 18 and 19, so I bought them for my Kindle and settled down for a rainy day’s read. 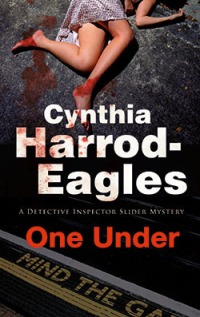 The first book, One Under, has a chilling plot. The opening scene is of a middle-aged man inexplicably throwing himself under a tube train at Shepherd’s Bush station, an obvious suicide. Soon after, a report comes in of a hit-and-run incident that has killed a teenage girl in a country lane far away from where she lives on the White City estate.

Normally, Bill Slider and his homicide team wouldn’t concern themselves with either of these sad but obvious deaths; but during a slack period, they are assigned to double-check that the hit-and-run was just that, and Bill Slider’s discovery that it might not be leads to all the rest.

First, he finds a case of another teenager who was found in the river but who didn’t drown; and then, as his team pursues small bits of information about these two girls, strange linkages begin to appear between them and some extremely unlikely people. Slider ultimately discovers a scene of widespread corruption amongst the upper level of British government, including the police department, and finds himself both out of his depth and persona non grata as he doggedly pursues the evidence.

Contrary to her usual practice of one mystery to one volume, Old Bones begins a new mystery while still dealing with the dangling strings of the old one. A young couple moves into a new house and, doing some renovations, discovers a skeleton buried at the bottom of the garden. The medical examiner determines that it must have been there for at least two decades; Slider’s boss, Detective Superintendent Porson, leaps upon this opportunity to keep Slider and his team simultaneously occupied and out of trouble. After all, it’s a very cold case; the likelihood of them even solving it is negligible, and the passions surrounding a missing person from that long ago are probably spent. But he reckons without the single-minded persistence of his best but most exasperating DCI. 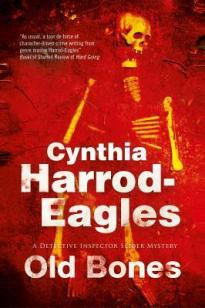 I don’t know exactly why I find police procedurals such as these so appealing. Perhaps it is because, of all kinds of mystery or crime fiction, the police procedural is the most realistic. After all, when a murder occurs in real life, it is most likely that the police, rather than your local personal trainer or some other amateur sleuth, will be the ones to respond to the call and attempt to solve the crime.

I also enjoy the variations present when you have a team of criminal investigators, rather than one lone guy, cooperating to find the killer. A good procedural may include uniformed cops, police detectives, medical examiners, forensics experts, psychologists, sketch artists, and so on. It’s an ensemble piece, and although certain protagonists will necessarily take the lead as the more developed and therefore more interesting people, the methodology of detection is based on real police work.  I enjoy the gradual ferreting out of each tiny detail that, added to a big pile of other tiny details, mounts up into irrefutable evidence.

Part of it, of course, is admiration for the character and ethics shown by the lead detective, Bill Slider. Harrod-Eagles has created a complex man with a complicated back story, and these personal details give humanity and depth not just to him but to all her characters to a lesser degree. I love the “team” the way Harrod-Eagles has written and continues to write them. And speaking of the writing, it’s clever, literate, and deliberate. Last but not least, DS Porson’s nonsensical malapropisms make me laugh out loud at least a few times per book, and I have a feeling that if I had a more comprehensive understanding of British humor, that would increase significantly.

The first book in this series is Orchestrated Death, in which the set-up for the series gives the reader a satisfying amount of detail into the back story of this obscure policeman; I have read all 21 subsequent volumes, and can only think of one that wasn’t quite up to the standard of the rest. It’s a consistent and immersive collection.