If you are a Tana French fan, as I am, there is no question that you will read whatever book she has written next; you just put a check in the “want to read” box on Goodreads and wait for its publication. And if you don’t want to buy your own personal copy so as to read it the instant it is released (I do, but I’m trying to come to terms with a new, slimmer budget, now that I am semi-retired), you resignedly log onto your local library catalogue, place a hold, and wait.

That’s what I did about six weeks ago, opting for the e-book with the idea that it would take less time to get than it would a hardcover copy. Then I promptly forgot about it and went about my business, until my email notification popped up to tell me that the e-book was awaiting me on my Kindle.

If you are a Tana French fan, then you know that all her books to date (six previous to this one) are part of a loose series called the Dublin Murder Squad, and each deals with a murder mystery to be solved by a Dublin detective. Each book has a different protagonist, although the others crop up in big, small, or completely incidental ways in the background of the books in which they don’t play lead. So while there is a familiarity about each book (a murder to be solved, a member of Dublin’s finest to do so), there is also a certain variety. You don’t know exactly what to expect, as you do with series in which the lead detective is always the same person. It’s kind of a genius way to write, if you can pull it off. Although I am a fan, for instance, of John Lescroart’s Dismas Hardy series, I have been vocal about my disappointment in those books in which he chooses one of his other characters as the lead. But so far, in her six books, French’s choices have never disappointed me, and I haven’t wavered in my slavering desire for the next one. 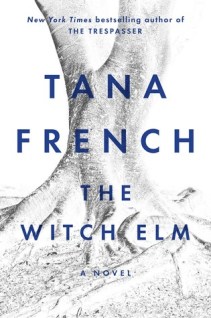 So, as I mentioned, The Witch Elm popped up on my Kindle a couple of days ago, and when I finished Michael Koryta’s book, I started to read. Imagine my confusion when, not having looked at a physical copy of the book for a flap synopsis or author blurb, I slowly realized that the Dublin Murder Squad was nowhere to be found? I kept reading as Toby, the average guy with a good job, friends, and a lovely girlfriend, went about his life, until one night he was mugged by burglars in his own home, and lay in the hospital recovering. Finally, two detectives showed up to take his statement, and I thought “Ah! here we go.”

Nope. The detectives came and went, and we stuck with Toby.

For her fans, this is a huge departure for French, and reactions will be mixed. Mystery readers and procedural fans may be disappointed. As with many procedurals, the crimes in French’s books, while clever, are the incidental vehicle, but the detectives’ engaging personal histories are what draw readers in and tempt them to return.

There is, eventually, a murder in this book, and there are some Dublin detectives taking an active part in its investigation; but the story continues to be told by the victims and, later, the perpetrators. Rather than featuring as the leads, the detectives maintain the persona that they represent to most people in real life: initially friendly and helpful, but also a looming source of panic and dread as their attention falls on you and you wonder, Do they really think I did this?

The book is a slow and intricate read, and takes almost 100 pages to build up to the discovery of the murder. Although some may believe that French’s editors were simply too afraid at this point to curtail the prose of such a successful writer, I don’t believe that’s the case here. Yes, I was initially somewhat frustrated to sit through the transformation of Toby from a basically happy-go-lucky guy to a man who didn’t know how or when he would ever recover from what’s been done to him. He’s pathetic, but he’s not the most sympathetic of characters, and my impatience grew with the narrative. But when the story transitions to the search for a murderer among Toby’s family, and so many questions are raised, you begin to realize that this book isn’t a whodunnit, it’s a psychological character study that, because of the unreliable nature of the characters, ramps up the tension exponentially with every page. In hindsight you see that all (okay, most) of that angst and drama you sat through with Toby was in service of everything that comes after, and you grow to appreciate your insider’s view as things continue to swing out of control. Although I had to make a little effort to get through the first part of this novel, I whipped through the last 30 percent of it between midnight and 3:00 a.m., and I don’t regret staying up one bit.

It’s hard, when you love unreservedly the kind of book that an author has reliably delivered as many times as has Tana French, and then she changes her focus. But I would call The Witch Elm a successful step in her career. If I’m honest, I still hope she returns to the Dublin Murder Squad, but I won’t be sad if, as well, we get a few one-offs like this one along the way.