I am an unabashed Francophile. I have been to Paris twice, and to the French countryside once for a painting vacation, and aspire to return there at any opportunity. I have mentioned here before that I am attracted to any book with France (particularly Paris) as its setting, and have reviewed a few worth reading. I was therefore excited to discover The Paris Key, by Juliet Blackwell, and to realize that it combines multiple elements that appeal to me in a story. 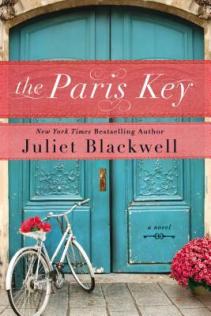 I ended up liking it a lot, but for complicated reasons. Although I expected to like it for the same reason that I have enjoyed, for instance, the books of Jenny Colgan—because the main character realized something about herself that made her elect to drastically change her lifestyle—that aspect of it wasn’t nearly as powerful as it could have been.

What I loved is the gradual exploration throughout the text not just of Paris as a city, but also of the French as a culture, a people, and a lifestyle. The author really got it that the daily priorities in France are completely different from those in America, that it’s a slower, more reflective, less frenetic, more contemplative lifestyle, valuing family, friends, and physical, visceral experiences such as cooking, eating, walking, sleeping, over the career, business, and industriousness focused on by Americans, the infernal “what you do for a living” that seems to take precedence over everything.

There is a moment when the protagonist, Genevieve, gets it too,
when the attractive Irishman Killian invites her to continue on to another destination after they have been out and about together for a while. Her first impulse is to say “I should get back,” and then she realizes: For what reason am I rushing back? I have no deadline, the work will still be there, I can be solitary later, this is an experience that I should embrace, and she does. It was in these moments that the book had weight.

The other thing that I enjoyed was learning more about the unusual vocation of locksmith, especially as expressed in a city as old as Paris, where the locks can vary from ancient to modern, and the duties of the locksmith include repairing and refreshing the old locks as well as installing new ones. It gave a glimpse into buildings with architectural details beautifully described by the author, and that loving attention to detail was a big feature for me.

Additionally, the temptation of the locksmith, to go anywhere simply because she is able, was tantalizing. The main character shared an addiction with me, which is to get to know people by observing the surroundings they choose to create for themselves—perusing their bookshelves, noting their choices of furniture, fixtures, and accessories, and rounding out what you perceive of them by seeing their “native habitat.” In other words, indulging a penchant
for nosiness!

The story itself was eclipsed for me by these other elements. Genevieve is a fairly typical heroine whose emotions have been locked up (yes, there is a lot of symbolism of this kind, some of it overwhelmingly obvious or even trite) by various childhood and adult events or traumas, who needs to work them out and open herself up to life (wince with the lock-and-key metaphors again!). Likewise, there is a mystery she desires to solve about her mother’s past that no one will openly reveal to her, so she must go digging through the possessions left by her Uncle Dave (the deceased locksmith from whom she is taking over the business) and also try to access memories from her Aunt Pasquale (who suffers from Alzheimer’s and is therefore an unreliable witness). The “mystery” becomes all too clear to the reader long before Genevieve herself suspects, which I found a bit unbelievable. And finally, as I have objected to in other reviews, this author had a bit of that compulsion to wrap things up too tidily at the end that I sometimes find grating. This wasn’t as bad as some, but there were issues and encounters that could have been let lie while closure was still provided.

I did appreciate the colorful characters Blackwell created to populate the quaint and insular Paris neighborhood, although a few were a bit stereotypically French—that is, overly vivacious, grumpy, and so on. But over all, this book and its slice of Paris life amply satisfied my fixation, and was a pleasant enough story along with it that it proved to be an enjoyable read.

It brought a favorite book to mind because of the locksmith theme, although the story, characters, setting, and the very locks themselves couldn’t be more different. That book is The Lock Artist, by Steve Hamilton. The similarity is in the feature of the seasoned locksman who takes a novice under his wing and teaches him or her a rare and intricate trade. If you’re in the mood for a thriller with some truly unusual elements to it, including some psychological content, a lot of law-breaking, and some romance, pick up Hamilton’s book. As I summarized it on Goodreads, “Lock-picking, low-lifes, and love!”