In these very serious times, I’ve been doing some reading of not-so-serious books. I like to think of them as junk food, although I don’t want to seem like I am denigrating these books or the reading of them by me or anyone else. I’m just saying that, like the difference between eating a gourmet four-course dinner or grabbing some cookies to satisfy your sweet tooth, there is a difference, both in the writer’s skill and in the reader’s level of engagement. Even if you are eating cookies, you are getting some nutrition along with your treat,
whether it’s from oatmeal or nuts or dark chocolate. You just aren’t participating at the level of a good salade niçoise or some mushroom bourgignon! (In these self-isolating times, many of us are also participating to a greater degree in cooking and baking—
can you tell?) 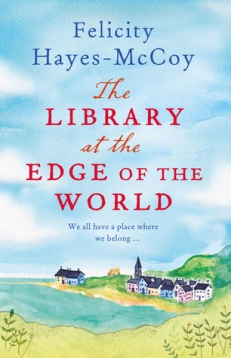 Anyway, my latest foray into relationship fiction is a duo by Irish writer Felicity Hayes-McCoy that, predictably for me, have to do with books and librarianship. The Library at the Edge of the World (Finfarran Peninsula #1) is described by its publisher as “a warm, feel-good novel about the importance of finding a place where you belong, perfect for fans of Maeve Binchy.” I think that stretches its importance a bit; I would be inclined to call these “Binchy lite.” But it is a lovely look at a few key people and a bunch more peripheral ones in an interesting locale teetering between community and estrangement. It reminded me a bit more of Jenny Colgan’s books.

Hanna Casey works as the librarian in Lissbeg, one of the small towns along the Finfarran peninsula. Her family goes way back on Finfarran but, until a few years ago, Hanna had embraced a much more active, well-to-do, and interesting life in London with her lawyer husband, Malcolm, and her daughter, Jasmine. Then she was devastated to discover that her husband had been having a long-term relationship with a colleague at work, a woman who purported to be her good friend, and in her anger and hurt she decamped with Jazz back to Ireland, telling her husband she wanted nothing from him. A few years later she is beginning to regret that hasty decision, as living with her outspoken and idiosyncratic mother in a small cottage is definitely beginning to pall, particularly since their buffer, Jasmine, has finished school and is pursuing a career elsewhere.

This is not the typical librarian pictured in this kind of feel-good fiction: Hanna wanted to be an archivist, dealing with great works of art in the rarefied atmosphere of a city museum or gallery, and somewhat resents the “depths” to which she has fallen as a small-town public librarian. She is in her early 50s, yet acts like some of the crotchety old-school librarians we all dreaded in our youth, who shushed us or kicked us out of the library for every tiny noise infraction and weren’t interested in providing such heretical innovations as computer classes or toddler story times.

Hanna’s saving grace is that she has come, gradually over the years, to believe in the power of reading, and spends two days a week driving a bookmobile to the far-flung tiny farming communities that populate most of the peninsula, developing a feel for what books to bring the many characters she encounters.

She has recently rediscovered a legacy left to her by her aunt, a piece of property that she couldn’t imagine being of any use to her while she was raising her daughter and decorating her beautiful home in London; but it has suddenly occurred to her that it might be an “out” to her nigh-intolerable living situation, and she thinks if she is careful with her money and can also get a loan, she can renovate Maggie’s old cottage and live in splendid isolation on the bluffs above the sea.

Then, plans by the bureaucrats of Finfarran come to light, which will polarize the peninsula by centralizing services in a grand new center located in the most populous town, thus cutting off all the small businesses and tourist attractions everywhere else, and also closing Hanna’s library. Hanna wakes up from her dazed existence and suddenly discovers within herself the will to fight for what she wants, and seeks allies to preserve a lifestyle she didn’t realize she had come to love.

I enjoyed this story quite a bit. I liked getting a look at rural life in the Irish countryside; the quirky characters were well developed and fun; and the story line was a good message about inclusiveness and community being more important than short-sighted financial success. The ending was a little pat, but played nicely off of Hanna’s former aspirations as an archivist.

The sequel, Summer at the Garden Café, was good, but not quite up to the first one. It furthered some of the relationships established in that book, it gave some interesting insight into the relative who left Hanna her house, and it moved some pieces around on the chessboard between London and Ireland. Basically, it was pleasant and innocuous, connecting here and there with real emotions when it details the situation of Hanna’s daughter, Jasmine.

There is a third book, The Mistletoe Matchmaker, which pulls in a different family mentioned peripherally in the first books, and sets up a romance for the Canadian granddaughter visiting her Irish family. I placed a hold on the e-book at the library, and will eventually report on the last of the trilogy. (If it is the last…)