The Dog Days of Summer

Yes, indeed they are, in California. Unrelentingly hot and humid, not to mention smoky…

So many idioms, positive and negative, in our eclectic language, relating to dogs!

They go on and on. But the one appropriate to this blog post is:

Every dog will have its day.

Why? Because it’s National Dog Day!

In celebration of that, you could read and enjoy a book about a dog! There are many from which to choose, encompassing the preferences of all ages and popping up in all genres. Here are a few suggestions…

The Art of Racing in the Rain, by Garth Stein
On the eve of his death, Enzo, a terrier/lab mutt, reflects back on his life. A philosophical dog, Enzo believes that he will be reincarnated as a human, so he has spent much of his life closely observing his human, Denny, and the rest of his family, so that he will have a head start in his next life. Charming, sad, insightful.

Suspect, by Robert Crais
In this departure from his Elvis Cole series by this popular mystery author, Crais examines the relationship between two broken cops, one a person, the other a dog. Scott is an LAPD cop with PTSD, trying to recover from a violent assault in which his partner, Stephanie, was murdered. Maggie is a sniffer dog, formerly with the Marines, who lost her handler to an IED and is equally traumatized. Eight months later, the two are paired as Scott tries out for the K9 unit as a way to stay on the job. [mystery]

The Plague Dogs, by Richard Adams
This is a tough one to read, heart-wrenching and tragic in parts, but so beautifully written. It’s the story of two dogs who escape from the horrors of a medical testing laboratory, and attempt to learn to live in the wilderness with the help of a fox named Tod, after the lab puts out a public alert that these dogs may be carrying bubonic plague. Find out what happens to Snitter and Rowf.

The Story of Edgar Sawtelle, by David Wroblewski
A young mute boy and his family happily live and work on their Wisconsin farm that they have turned into a dog-breeding kennel. Then the incursion of an ill-intentioned relative and a personal tragedy send the boy running away into the Wisconsin backwoods with three loyal dogs he helped raise. This seems to be one of those books that people either love or hate…which will you be?

Because of Winn-Dixie, by Kate DiCamillo
India Opal Buloni, 10, is sent to the market (the Winn-Dixie, a southern supermarket chain) by her father, the preacher, for two tomatoes, a box of macaroni and cheese, and a bag of white rice. She comes back with a dog. The inadvertent acquisition of Winn-Dixie (the name she gives the dog in a moment of panic when she claims him for her own) helps Opal befriend a quirky group of locals, and also to deal with the loss of her mother, who left when Opal was three. A Newbery Honor Book. [children’s fiction]

Travels with Charley: In Search of America, by John Steinbeck
In September of 1960, John Steinbeck set out on a road trip in his pickup truck, Rocinante, accompanied by his distinguished French poodle, Charley. It was a quest to reacquaint himself with the flavor of the country’s identity. Given the decade in which this autobiographical work was written and lived, the identity (at least in the southern portion of the trip) was tumultuous. But it’s also a thoughtful firsthand account of the beauty of the country and the character of its varied people.

Travels with Casey, by Benoit Denizet-Lewis
America has the highest rate of dog ownership in the world. Denizet-Lewis, secretly insecure that his dog, Casey, didn’t like him, decided to explore both his personal relationship with his own dog and the relationships of other Americans with theirs by taking a four-month, 32-state, 13,000 mile trip in a rented motor home, interviewing dogs and their owners in every setting and profession. This Steinbeck-lite journey is entertaining and often hilarious.

Dog Years: A Memoir, by Mark Doty
A poet celebrates the 16 years he shared with his two beloved dogs, Arden and Beau, during a period of devastating personal and human tragedy. Beautiful and sad.

Rin Tin Tin: The Life and the Legend, by Susan Orlean
Allegedly found in the ruins of a bombed-out dog kennel in France during World War I, then brought to Los Angeles by Lee Duncan, the soldier who found and trained him, by 1927 Rin Tin Tin had become a Hollywood star. Orlean researched both the dog and the legend; her book spans 90 years and explores both dogs and Hollywood.

The Genius of Dogs, by Brian Hare
A scientific study of how dogs think (and their genius at getting along with people). What motivates your dog, and how much has he learned through cohabitation with you? “Dognition” has some surprising aspects!

The Trouble with Poetry, and Other Poems, by Billy Collins
Not all of the poems in this book are about dogs, but the ones that are…are not to be missed.

Dog Songs, by Mary Oliver
“But I want to extol not the sweetness nor the placidity of the dog, but the wilderness out of which he cannot step entirely, and from which we benefit. For wilderness is our first home too, and in our wild ride into modernity with all its concerns and problems we need also the good attachments of that origin that we keep or restore. Dog is one of the messengers of that rich and still magical first world. The dog would remind us of the pleasures of the body with its graceful physicality, and the acuity and rapture of the senses, and the beauty of the forest and ocean and rain and our own breath. There is not a dog that romps and runs but we learn from him.”

Please note that this list is not necessarily “the best” (who decides that, anyway?) and by no means complete; it is an eclectic sampling of all sorts of books about dogs, from every viewpoint (including their own), but there are hundreds more. Just Google “best books about dogs” or search for lists on Goodreads and you’ll see what I mean!

If your inclination on National Dog Day is to go beyond the act of reading a book, here are some other ideas:

If nothing else, greet the dogs you meet along the way today with a hearty “Happy Dog Day!”

What? You say you’re a cat person? Then here’s a final read…

Dog vs. Cat, by Chris Gall

I woke up this morning and checked the calendar to discover that it’s International Cat Day! I must commemorate that, or Gidget and the spirits of all my house cats who have gone before will haunt me. Here, therefore is an eclectic and by no means complete list of some books that feature felines as protagonists and companions. The array of adult books seem to fall into one of two camps: The cats who solve mysteries with their human counterparts, and the cats of science fiction, who are sentient to various degrees. The children’s books celebrate cats in all ways possible from the realistic to the bizarre. These are in no particular order, except possibly by the age of the humans to which they may appeal. If you wish to find hundreds more books about cats, look here, under “lists” in Goodreads.

The Cat Who… mysteries, by Lilian Jackson Braun, in which a reporter and his cat solve mysteries. First book: The Cat Who Could Read Backwards.

The Joe Grey mysteries, by Shirley Rousseau Murphy, in which there are talking cats and also a human who discovers an ability to morph into a cat. First book: Cat on the Edge. 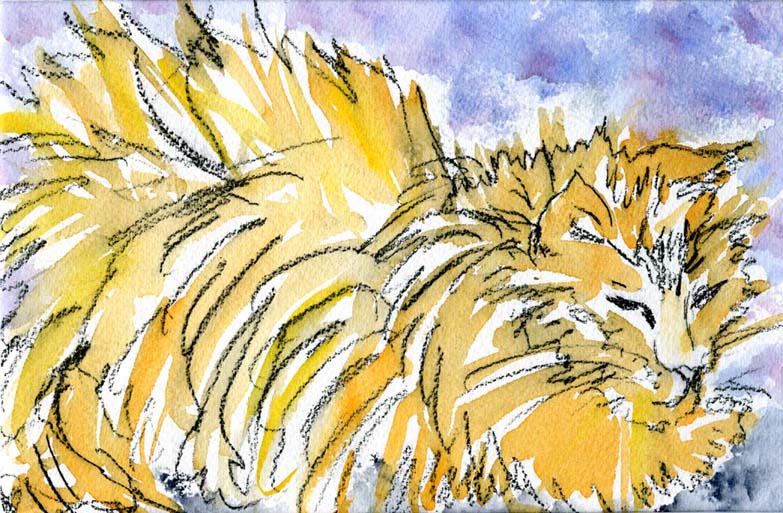 The Dalai Lama’s Cat, by David Michie, in which the Tibetan Buddhist leader’s cat offers insights on happiness and meaning.

The Chanur novels, by C. J. Cherryh, in which a leonine species—the Chanur—take in a human refugee and by so doing threaten the interspecies Compact. First book: The Pride of Chanur.

The Cinder Spires books, by Jim Butcher, in which there are also cat clans and some naval airship action. First book: The Aeronaut’s Windlass.

The Cult of the Cat books, by Zoe Kalo, in which Trinity is left with a dead grandmother and a thousand grieving cats. A sort of Egyptian urban fantasy. First book: Daughter of the Sun.

Old Possum’s Book of Practical Cats, by T. S. Eliot, in which the author describes cats each by their distinct personality. (Poetry.) Someone should set this to music…

Millions of Cats, by Wanda Gág, in which a lonely old couple acquires companions. This is known as the original picture book for children.

The Cat in the Hat, by Dr. Seuss, in which Sally and her brother receive a visit from a madcap cat. 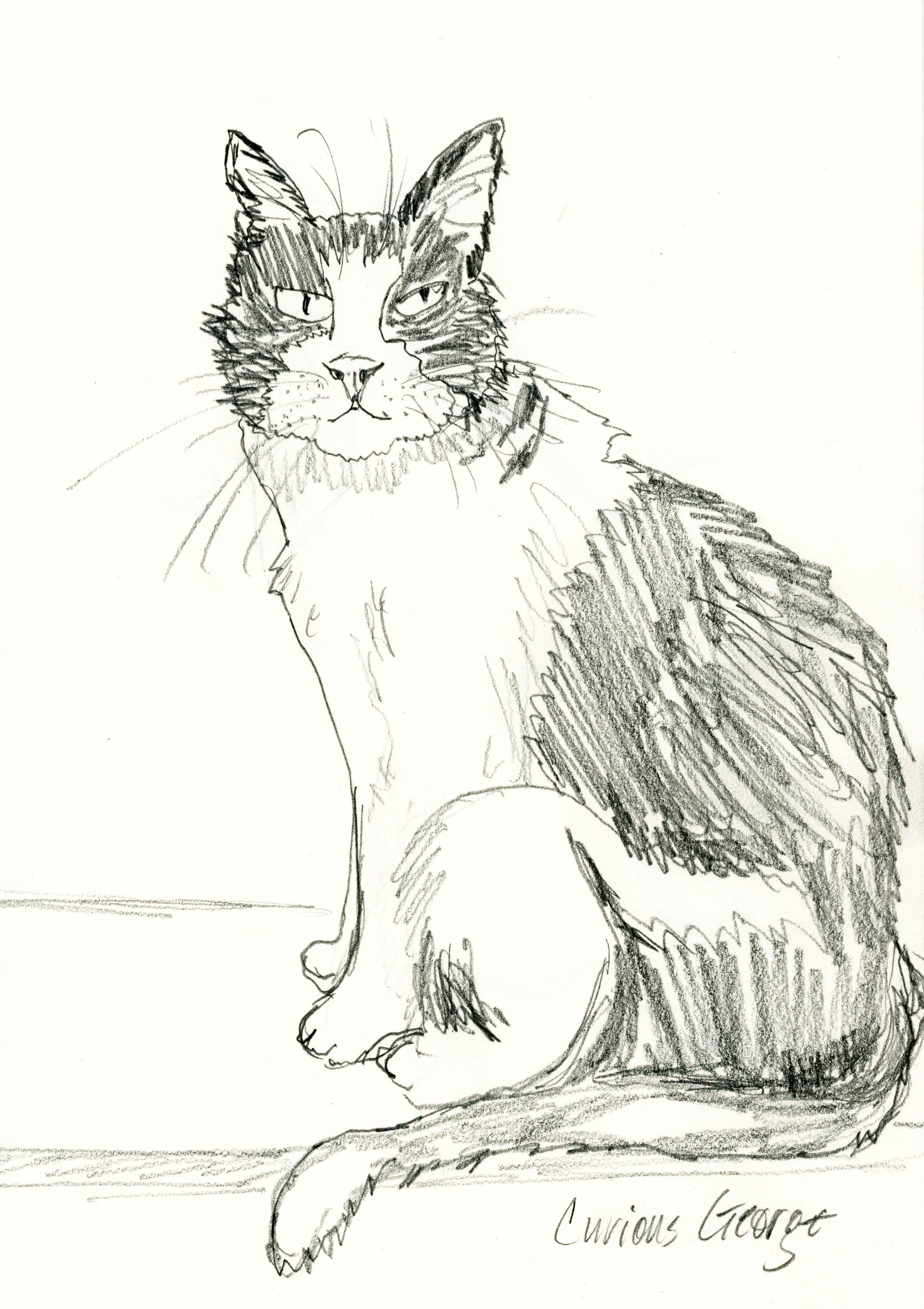 Socks, by Beverly Cleary, in which the cat has to learn to share his family with their new baby.

The Warriors books, by Erin Hunter, in which a house cat discovers clans of cats living in the wild in the forest…. First book: Into the Wild.

Varjak Paw books, by S. F. Said & Dave McKean (illustrator), in which a cat goes Outside and overcomes challenges.

The Wildings books, by Nilanjana Roy, in which a small band of cats lives in the alleys and ruins of Nizamuddin, an old neighborhood in Delhi, India.

The Feline Wizards series, by Diane Duane, in which feline wizards time travel to avert disasters. First book: The Book of Night with Moon.

The Black Cat Chronicles, by Aileen Pettigrew, in which there are cats, zombies, and magic. First book: Soul Thief.

Stray, by A. N. Wilson, in which a cat without a home tells his own rather bleak story.

Tales of the Barque Cats, by Anne McCaffrey, in which cats are essential members of the crews of space vessels…until an epidemic threatens their extinction.

The Incredible Journey, by Sheila Burnford, in which a bull terrier named Bodger, a Labrador retriever called Luath, and Tao, a Siamese cat, travel 300 miles through the Canadian wilderness to reunite with their people.

There is a rare and particular pleasure that arrives each April in your email inbox, if you so desire: A poem a day, for 30 days. And if you wish, you can receive two!

April is National Poetry Month, and two entities will send you a poem every day if you subscribe. One is Knopf Poetry, and you can sign up here; the other comes from the American Academy of Poets, and although it’s highlighted in April, their Poem A Day service runs all year long. They also have a lot of other suggestions about how to celebrate National Poetry Month, so if you wish to immerse yourself in language, take some of their suggestions.

From one of my favorite poets, Mary Oliver, who just passed away in January:

Every summer I gather a few stones from
the beach and keep them in a glass bowl.
Now and again I cover them with water,
and they drink. There’s no question about
this; I put tinfoil over the bowl, tightly,
yet the water disappears. This doesn’t 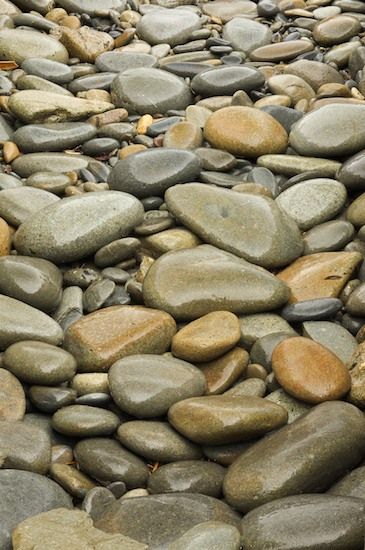 mean we ever have a conversation, or that
they have the kind of feelings we do, yet
it might mean something. Whatever the
stones are, they don’t lie in the water
and do nothing.

Some of my friends refuse to believe it
happens, even though they’ve seen it. But
a few others—I’ve seen them walking down
the beach holding a few stones, and they
look at them rather more closely now.
Once in a while, I swear, I’ve even heard
one or two of them saying “Hello.”
Which, I think, does no harm to anyone or
anything, does it?